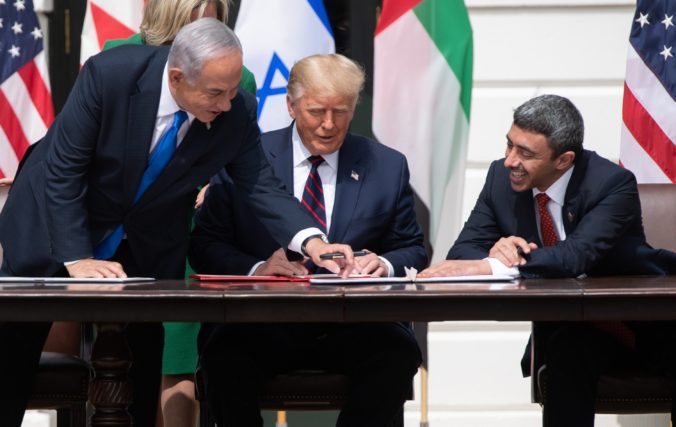 In September, the UAE and Israel signed “the Abraham Accords,” normalizing relations between the UAE and Israel. The Trump Administration presented this as if it was equivalent to the Camp David Accords, a ground-breaking peace agreement that would transform the world. Much of the Middle East policy community, however, met it with a shrug. I’m not sure I’m joining in on that shrug. While it’s true Trump exaggerated and misrepresented the deal, as he is wont to do, I worry a sneaky “common wisdom” has developed among observers that may obscure the significant impacts of this agreement.

The deal came together over the summer, although there have been signs of a potential shift among Gulf Arab states towards Israel. They share a common enemy in Iran. Additionally, Israeli Prime Minister Benjamin Netanyahu visited Oman in 2018, while the UAE’s US Ambassador wrote an op-ed in an Israeli newspaper hinting at possible normalization. Billed as a peace deal (even though they weren’t really at war) the two states agreed to normalize diplomatic ties and expand economic cooperation. While some saw it as a betrayal, other seem to see it as a relatively inconsequential event.

There are several reasons to assume the deal doesn’t matter. One is that the UAE and Israel weren’t really at war; this wasn’t like Egypt and Israel at Camp David, having fought several outright wars over the past few decades. So the change wasn’t that dramatic. Moreover, the UAE and Israel had some economic connections already. The deal thus seemed to be just codifying conditions that already existed.

Beyond not mattering, there are also reasons to oppose the deal. One is that–despite UAE protestations–it seems to have sidestepped the concerns and needs of the Palestinian people. This leaves the Palestinians without their own state, and still living under occupation. Additionally, it was spearheaded by the Trump Administration. Trump has prioritized flashy foreign policy shows–like the appearance with Kim Jong Un–over substantive, long-lasting arrangements, so there are reasons to doubt whether this will come to anything. His Administration’s foreign policy implementation has also been erratic, so I wouldn’t be surprised if they found some way to mess this up. Finally, Netanyahu is not most transparent of partners, and has already been giving mixed signals about whether the deal addresses F-35 sales to the UAE.

That being said, there are increasing reasons to suggest this could be significant and I worry policy observers are ignoring them.

Notice I am not saying the deal is good. The concerns about its impact on the Palestinians are real. And I wouldn’t doubt the Trump Administration finds some way to screw up it up, even if they’re only in office a few more months. Additionally, I worry there are built in contradictions, like the requirement that any F-35s the UAE gets are downgraded to make them vulnerable to Israel. I can’t imagine the UAE will be ok with that in the long-term.

But it does have the potential to reshape Middle East relations. So why are we so quick to dismiss it?

One reason is, of course, Trump. Even if this deal is ok, 99% of the rest of his policies–domestic and foreign–are not. So people are less inclined to cheer potential moderate triumphs. Also, as I noted, his Administration’s incompetent and erratic foreign policy means it may not be worth analyzing this, as it could easily fall apart. Finally, as I discussed in the context of his Syria air strikes (which feel so long ago), intention matters; even if Trump does something that may be helpful, he’s likely doing it for the wrong reasons.

I suspect, however, there’s another reason. As I’ve written about here, the Middle East studies community–both academic and policy–sometimes falls prey to a “common wisdom” that emerges and sustains itself without debate. This is exacerbated by Twitter; “analyses” are reduced to 280 characters and people have an incentive to amplify popular takes.

In the earlier case, it was the “common wisdom” that the UAE and Saudi Arabia were reaching out to Iran because they thought America wasn’t tough enough, despite no one offering clear evidence for this point and some evidence arguing against it.

In this case, it is the assumption that the UAE-Israel deal will be meaningless. Whatever you think of the deal’s ethics or the Trump Administration’s foreign policy, I think the Middle East studies/policy community needs to rethink that assumption.