As one of the new Ducks, I’m linking to bits and pieces catching my eye/getting me thinking for the first time this morning. Enjoy!

Handy guidance on ‘how to get rid of your fake academic self’ supplied by David Berliner.

I wasn’t at APSA but John Yoo put in a controversial appearance along with the iconic orange jumpsuit and a barrage of protesters. See APSA members’ letter against the appearance and APSA’s response (and let’s never forget the Torture Memos).

Aid donors withdraw as distressing images from other conflicts and disasters are used to intensify violence against Rohingyas in Rakhine state. (via Jessica Auchter)

We’ve seen the pictures but this from Rhonda Garelick is by far the most thought provoking analysis I’ve read. Seriously considering using it as a teaching material/discussion article during post-structuralism week (students: you have been warned).

‘…instead of being a supporting presence in the president’s trip to survey flood damage, Melania became the star and the trip morphed into a simulacrum, a kind of Vogue shoot “simulating” a president’s trip. In other words, the realness of everyone and everything else (including hurricane victims) faded and the evacuated blankness of the commercial overtook the scene.’

In other Harvey news, this image went viral – working to reproduce, reinforce, and for some ‘prove’ so called truths about gender. Even Save the Children – renowned for their commitment to gender equality – appropriated the image for the purpose of promoting their Harvey fundraising efforts. Such are the power and value of gender normativity.

Hot off the press

Is T. Swift a product and embodiment of Trump-era politics? Mark Harris thinks so, and I’m inclined to agree. After all, as Paul Kirby argues in Sept 2017’s International Studies Review , ‘politics is found in cultural artefacts.’

Oops I almost forgot to mention, DPRK have carried out the sixth test of what is claimed to have been a thermonuclear device  (although,according to David Walsh, it might actually just (!) have been a boosted-fission weapon). Measuring 6.3 in magnitude and with tremors felt as far away as Vladivostok, the device tested was of the variety capable of being mounted on to an ICBM, had an expected yield of 100 kilotons (9.8 times bigger than the one tested last year/4-5 times bigger than Fat Man), and I’m going to have to stop now and link to the ever relevant Carol Cohn.

Have a great day! 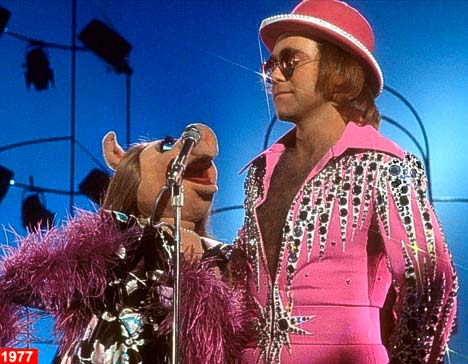 This is the picture you get when you Google "Elton John Haiti." Bless you, Google.

It’s the eternal quandary of thinking about the intersection of international politics and global health: where does Elton John fit in? We now have an answer. It’s where we try to understand issues of moral and legal responsibility of an international organization.

About a month ago, I wrote about cholera and global health. One of the reasons cholera is such a big issue is because of the ongoing outbreak in Haiti—the worst in recent history, and one that we can directly trace to the 2010 earthquake and Hurricane Matthew in October. Natural disasters can obviously disrupt the sanitation systems that keep cholera from spreading. Haiti’s cholera outbreak is different, though; the disease came to the country with UN peacekeepers from Nepal. The soldiers’ untreated waste went into open pools, where it easily leaked into important waterways and spread to a population already grappling with a lack of sanitation infrastructure.

END_OF_DOCUMENT_TOKEN_TO_BE_REPLACED

I plan to post relevant items for the World Politics in a Time of Populist Nationalism (WPTPN) group somewhat regularly, so please send links to me via Twitter (@whinecough or the #WPTPN hashtag) or e-mail (wkwineco _ at _ indiana _ dot _ edu). For more information on the WPTPN series see this post. Follow WPTPN posts using this tag.

— “For Trump, politics, family and business merge. We know from Indonesia how that may end up,” by Tom Pepinsky at WaPo’s The Monkey Cage.

— “Trump and Ethnicity in Comparative Perspective,” by Cullen Hendrix at Political Violence @ A Glance.

— “Trump and Diplomacy: Time to Eat Some Spinach,” by Elizabeth N. Saunders and James H. Lebovic at Political Violence @ A Glance.

From 1997 to 1999, I served in the Peace Corps in the Andean country of Ecuador. Ecuador is rich with contrasts. With the Galapagos, the Andes, and parts of the Amazon, the country possesses stunning natural beauty. The people have an incredible generosity of spirit, yet the country is riven by racial and regional differences. Until recently, high oil prices papered over some of these differences, but the president, Rafael Correa, is a left wing populist in the tradition of Hugo Chavez. He has taken to castigating his domestic on-line critics through television naming and shaming efforts that are unbecoming for a head of state. John Oliver has a wildly funny take-down of Correa’s pompous self-importance, which prompted a vigorous response from Correa (some calling it an “international incident”) and another round of humor from Oliver. The original video is hilarious and worth a watch (I’m not sure if embedding worked on this video so here is the link here though I think clicking on the screenshot below will work). 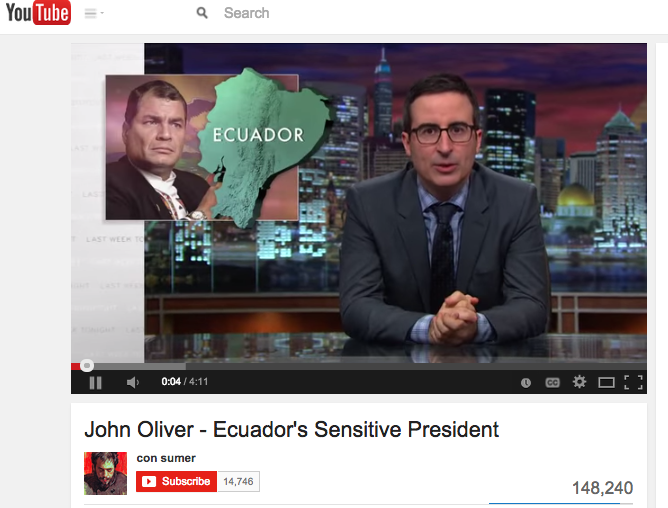 John Oliver’s take-down of Ecuador’s mercurial president is hysterical, but the next video by Peace Corps volunteer Kyle King is extraordinary. Kyle created this video with Peace Corps Week approaching as a way to honor his counterpart host family, capturing their tremendous grace and humor but also the hardships and tragedies that families endure. It’s hard to talk about the video without sounding maudlin, but I found it to be really powerful film-making and brought back so many memories of my own Peace Corps experience.

Welcome to sunny and warm New Orleans (or at least sunnier and warmer than wherever most of us have come from!). If you are stepping away from conferencing for a bit, here are a few good reads on the security front. I’ll likely come back in the new few days with one on energy/environment and health. Here I link to work from Alan Kuperman, Jay Ulfelder, Phil Hazlewood, Paul Staniland, and Graeme Wood, covering Libya, body counts, insurgencies, and ISIS. Enjoy. END_OF_DOCUMENT_TOKEN_TO_BE_REPLACED

After a hiatus, we will be back with some regular Morning Linkage. Look for the icon and the application of the new topic. I’m going to be brief here with some links. And it’s not even morning!

The Policy-Academy Gap – Once More Unto the Breach