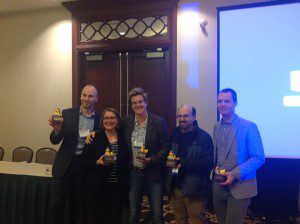 The Duck of Minerva crew developed in 2012 the Online Achievement In International Studies [OAIS] Awards, which came to be known as the Duckies.  At the subsequent ISA meetings, the Duck of Minerva, in concert with SAGE, have held receptions to award the Duckies and to present short “ignite” talks that serve as spoken blog posts.   In 2015, the ISA recognized the Online Media Caucus, which serves to promote the use of online media by scholars of international studies in their research, teaching, service and public engagement.  The OMC is taking over the OAIS Awards, starting with those to be handed out in 2016.

OAIS awards are intended for English-language international-studies media  whose output has significant scholarly content.  Thus far, the awards have focused on blogs.  We are in the midst of figuring out additional non-blogging categories.

Officers of the Online Media Caucus are ineligible for OAIS awards, although the collective blogs in which they participate are eligible.

Erica Chenoweth, “Nonviolent Conflicts in 2014 That you May have Missed Because They Were Nonviolent” (Political Violence at a Glance), 2015