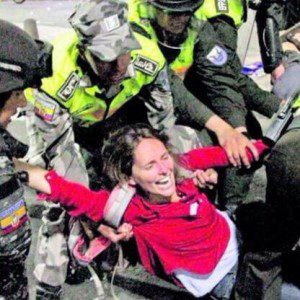 END_OF_DOCUMENT_TOKEN_TO_BE_REPLACED

Earlier today, I received an email alerting me to the fact that the University of the West of England’s Academic Board supported a recommendation from the Vice Chancellor’s Executive Group to close all international relations and politics programs.

Apparently, the plan is to refocus the university (one of the ten largest in England) on skills-based learning and vocational courses, which essentially means that arts and social sciences have no place in future plans. As long-time Duck readers know, I think this is a very bad idea — and some much-discussed research strongly supports the value of liberal arts education. Indeed, this research suggests that liberal arts students even out-perform vocationally trained students in the job market. In IR at UWE, 95% of “Students [are] in work / study six months after finishing” their course.

Unsurprisingly, students are very happy with the education they receive at UWE:

Indeed, the students are campaigning  to save their programs. They have set up an online petition. They also have a Facebook page. An especially resourceful Politics/IR student at UWE made the following video about the pending decision and the value of the programs: END_OF_DOCUMENT_TOKEN_TO_BE_REPLACED

Kevin Bales, President of Free the Slaves, has won the 2011 Grawemeyer Award for Ideas Improving World Order. The prize is worth $100,000 this year.

The press release describes the award-winning ideas from Ending Slavery, the most recent book published by Bales with University of California Press:

In the book, Bales outlines steps to end the enslavement of some 27 million people worldwide. Slavery and human trafficking are tightly interwoven into the modern global economy, so new political and economic policies must be enacted to suppress them, he says.

Slavery, illegal in every country but still widely practiced, can be stopped within 30 years at a cost of less than $20 billion, a much cheaper price tag than most other social problems, he argues…

“Bales lays out an urgent human challenge, offers ways to make a difference and challenges the reader to become part of the solution,” award jurors said.

The Chronicle of Higher Education covered the story, as did the local Louisville Courier Journal and other news outlets. This is from the local paper:

[Bales] estimates that modern slavery puts tens of billions of dollars worth of products into the global economy each year. And while every country has laws against slavery, some don’t enforce them or provide few resources to fight it.

Bales’ ideas for suppressing it involve a mix of tightening government enforcement on illegal trafficking; enacting new policies for businesses that identify when slavery is connected to global supply chains; and adding more grassroots efforts to help free groups of slaves — and then help them get basic skills to avoid such traps again.

Bales was trained as a sociologist at LSE, but IR theorists interested in norm construction, human rights, and/or scholarly activism will want to check out the award-winning book, as well as other scholarship Bales has produced on this topic.

Disclosure: I chair the Department Committee that overseas the administration of this prize. This entails soliciting external book reviews, chairing a first-round screening committee, bringing together a panel of experts to evaluate and rank a set of semi-finalists, and making sure that the information gleaned from these processes is advanced to a Final Selection Committee.

Instead of Heading to the Mall Today, What Say We Nudge the EU to Protect Congolese Civilians?

If you’re like me (or Dan) and you live in the U.S., you spent much of yesterday’s holiday feeling lucky to be living in America and not in Goma (or Mumbai. Or Darfur.) Well, in the spirit of Dan’s suggestion in his last post, note this appeal from Avaaz.org.

The brutal war in Congo is escalating, as a terrified Congolese people plead for Europe to send peacekeepers to protect them. European leaders are wavering as their council meeting approaches – we have just one week to persuade them to act.

We know how to do it — last week, Avaaz ran a hard-hitting advertisement in The Times of London, pressing UK leaders to support a European force or risk responsibility for genocide — their Africa minister called us immediately, and their position has shifted — the UK has moved toward supporting a European force!

The Congo has languished for too long, with unspeakable suffering. It now has a brief window of the world’s attention – let’s seize that window to bring peacekeepers who can help achieve lasting peace.

Instead of either shopping today or “buying nothing,” I think you should join me in buying a shot at action on this one (just click here!) The ads will make a difference in agenda-setting, if not in immediate policy, and even if it’s a long shot it’s the right thing to want to do.

Besides, If EU troops can do some good anywhere right now, the DRC is probably as good a place as any. The escalating situation in DRC’s North Kivu province is being compared to Srebrenica 1995 and Rwanda 1994. MONUC, the existing UN operation in DRC, is vastly outmatched and lacks the capacity or rules of engagement to implement its mandate to protect civilians; though the Security Council just authorized 3,000 more troops, it could take months before they materialize. If the EU has the capacity, its members should pony up, and people around the world should take the trouble to encourage them to do so.

But I also think that organizations like Avaaz should stop referring to such an interim force as “peacekeepers.” There’s currently no peace to keep in DRC, and what is needed is soldiers willing and logistically able to prevent atrocities. Let’s be very clear about that, and ask the EU to do the same.

Steven Spielberg has withdrawn from his role as artistic adviser to the Beijing Olympics to protest China’s policy towards Darfur. Seemingly, yet another example of “celebrity activism” around human security issues.

I blogged about this before. As I continue to think about the role of celebrity activism in human security campaigns, I’ve been pondering who actually counts as a celebrity? Performers clearly do. But what about other well-known members of the entertainment industry – writers, producers? What about well-known figures who perform public, rather than media roles? In a digital world, where do the lines blur between political, cultural and religious “celebrities”? Also, is there an analytical difference between celebrity “activism” and “celebrity activism”?

An example of the former conundrum. The transnational advocacy literature sometimes refers to Princess Diana’s role in championing the landmines issue. But was her role more analogous to that of Bono re. debt relief? Or more analogous to Hilary Clinton’s championing of attention to sex trafficking? Was Diana a celebrity in the movie-star sense or a political figure in the statesperson sense? What about Al Gore? Is he a former president or a movie star? Few would doubt that his “celebrity” activism has drawn new attention to climate change as an issue. And are religious figures such as the Dalai Lama or Pope genuine “celebrities”? Are you a “celebrity” if you are not routinely featured in the tabloids?

And what do we mean by activism anyway when it comes to celebrities? There is personal activism, where a celebrity uses his or her renown as soft power in their own civic work – as the LiveAid events depicted in the Nickelback video suggest. And then there is the embedding of activism into media outputs produced by celebrities themselves – such as the video “If Everyone Cared” itself or the film “Blood Diamond.” Are these activities really comparable? Should they not be disaggregated somehow in order to gauge the relative influence of celebrities in global politics?

Some careful attention to the actual role of celebrities in transnational campaigns – for better or worse – is long overdue by IR scholars. But there are conceptual problems to deal with first. Who can offer a parsimonious definition of “celebrity” or of “celebrity activism” that might guide rigorous research on the subject?