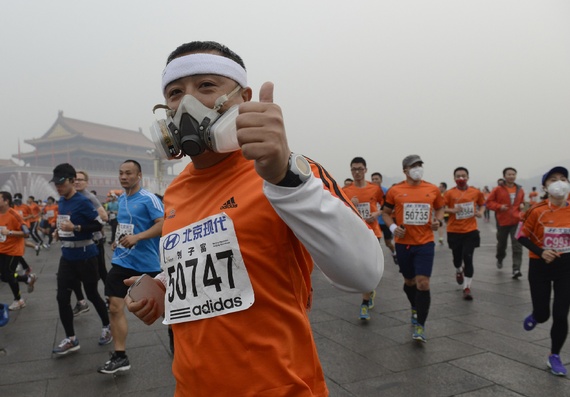 In the lead up to the APEC summit about to start this week in Beijing, China’s leadership undertook a series of emergency measures to avoid the continued embarrassment of a string of poor air quality days that had bedeviled the country over the previous year. The government reinstated the familiar practice of restricting car travel to certain days of the week based on license plate numbers. Government workers and schools were closed for an “APEC holiday” to reduce traffic. Factories have been ordered to shut down during the summit. Interestingly, those plans seemingly backfired as companies anticipated the later forced work stoppages by working overtime in advance of the later down hours they would be offline during the summit.

Thus, in October when Beijing often enjoys clear skies and cool weather, the city was cloaked in a devastating haze. Some of the world’s best soccer players from Argentina and Brazil were in town for a friendly, only to be confined to their hotel rooms for most of their visit, save for training sessions that left them gasping for breath. Later in the month, photos (see above) captured the spectacle of the Beijing Marathon being run amidst this foul air, with many participants clad in elaborate gas masks as they ran the course. Of course, while foreign visitors are exposed to this pollution during short stays, this is the air quality the people of China experience all the time. A recent study by the Natural Resources Defense Council (NRDC) concluded that seventy percent of the country’s population live in areas that exceed air pollution levels recommended by the World Health Organization. That pollution was estimated to be responsible for 670,000 premature deaths in 2012 from stroke, heart disease, lung cancer, and pulmonary disease.

At this point, China’s bad air isn’t news (see my earlier posts here and here). However, China’s unfolding “war on pollution” is news and may ultimately improve both air quality and address climate change.  END_OF_DOCUMENT_TOKEN_TO_BE_REPLACED