Dick Cheney’s memoir apparently verifies an interesting political point from George W. Bush’s memoir. Last November, I noted that the former President claimed that Senator Mitch McConnell (R-KY) had approached him in 2006 prior to the congressional elections in order to urge withdrawal of some US troops from Iraq. This might save the Republican majority, argued the Majority Leader, even though McConnell was publicly taking the position that the US should remain in Iraq for vital security reasons. After the election, of course, Bush famously increased the US deployment in Iraq (“the surge”).

A local columnist in Louisville has identified a key passage in Cheney’s memoir that apparently confirms Bush’s account, based on the former Veep’s recollection of a July 2007 dinner he hosted (p. 462):

Republican Minority Leader Mitch McConnell walked over to me. Mitch had been one of the most concerned of the Republicans. He was up for reelection and had suggested to the president that he needed to begin a withdrawal in order to avoid massive defection of Republican senators.

Was he lying when he said US troops were vital for security? Was he simply acting as a hypocrit? Or, and you can feel free to pick more than one choice, was he overtly expressing his partisan preferences in each situation, regardless of the security implications?

“In September 2006, with the midterm elections approaching, my friend Mitch McConnell came to the Oval Office. The senior senator from Kentucky and Republican whip had asked to see me alone. Mitch has a sharp political nose, and he smelled trouble.

‘Mr. President,’ he said, ‘your unpopularity is going to cost us control of the Congress’ …

The Louisville Courier-Journal, November 9 quotes Bush as replying that he would “set troop levels to achieve victory in Iraq, not victory at the polls.”

“Because he [McConnell] had been a cheerleader for the president in the war, it makes him look like a bit of a hypocrite,” Desch said of McConnell. “It also makes him look bad because he seems to be trimming his sails in response to electoral politics, which doesn’t look very statesmanlike.”

Indeed, in an op-ed on November 11, the C-J detailed McConnell’s hypocrisy:

At the time that Sen. McConnell was privately advising Mr. Bush to reduce troop levels in Iraq, he was elsewhere excoriating congressional Democrats who had urged the same thing. “The Democrat[ic] leadership finally agrees on something — unfortunately it’s retreat,” Sen. McConnell had said in a statement on Sept. 5, 2006, about a Democratic letter to Mr. Bush appealing for cuts in troop levels. Sen. McConnell, who publicly was a stout defender of the war and Mr. Bush’s conduct of the conflict, accused the Democrats of advocating a position that would endanger Americans and leave Iraqis at the mercy of al-Qaida.

The op-ed notes that McConnell has three choices: call Bush a liar, admit that he was lying publicly at the time, or “explain why the fortunes of the Republican Party are of greater importance than the safety of the United States.”

In the original piece, University of Virginia’s election savant Professor Larry Sabato says that this revelation signals that George W. Bush is out of politics and that he’s settling some scores.

Virtually everyone quoted in the story agrees that McConnell was right — Bush’s war in Iraq did cost the Republicans the Congress in 2006.

Election Roundup, part I of probably many

Last night’s election seems to have been the political wave that some had anticipated. Democrats won big– taking not just the House and Senate (it seems), but also governorships and other local races nationwide.

Aside from all the post-election analysis that will be coming out in the next few days, 2 points stick out from an International Relations perspective.

1. Former Speaker of the House Tip O’Neil once famously said “all politics is local” and that mantra usually applies in Congressional elections, when local issues are very important for local candidates. This election was markedly different. Looking at the exit polls, its rather clear that Iraq was a top if not the top issue for the voters, and they voted to send a message to the President on Iraq. A foreign policy issue, not a domestic issue, dominates a mid-term election. Nearly unheard of in American politics.

As a result, incoming Democratic leadership in Congress can clearly claim a mandate to change direction on Iraq.

2. It didn’t take long. Remember last week when Bush said he wanted Rumsfeld to stick around for the remainder of the term? Reports are now out that SecDef Rumsfeld is “resigning”, to be replaced by Robert Gates. Gates was director of the CIA back in the first Bush Administration, and is now (or was up until now) president of Texas A&M University. While the outcome of the Senate is still officially in doubt, it seems that the D’s will take the 2 seats necessary to get the majority. Bush knows this, and knows that his nominee will face a much more confrontational, if not hostile, confirmation process. This seems to be the beginning of a major shift in Iraq policy. You can bet that the Senators will be asking Gates what his plan is on Iraq and won’t confirm him until he comes up with an acceptable answer. 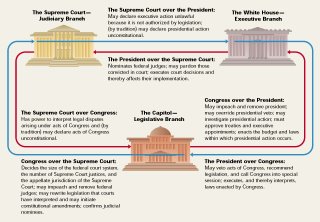 Let’s all say a warm welcome to our old friend, Checks and Balances. You may not remember him — it seems like he’s been gone forever — but he used to play a key role in our Constitutional Architecture.

I sure hope he sticks around for a while.

Lots of bad things are happening. Iran just tested advanced missiles. Anti-US forces are on the rise in Latin America. Terrorism is on the rise. We’ve made the world more dangerous.

I leave the natural conclusion up to our readers.