Jolie-Pitt, Trump and Bono Walk Into a LSE Classroom: why dedication and commitment isn’t expertise

Oh man, I really didn’t want to write about Angelina Jolie Pitt  (AJP) and her damn LSE appointment. When I heard the news it just made me feel tired. But there has been an interesting/frustrating  debate emerging and I just can’t keep my yap shut- even on maternity leave. In his post on the topic, Dan Drezner asks us to all calm the F down; he assures us that policy schools have always been opportunistic and brought in pretty unqualified but interesting folks to teach (well, he sort of says that). The Aidnography post, Why you should be critical of Professor Angelina Jolie Pitt’s LSE gig does a great job of putting the appointment into the broader context of hollywood obsession with poverty/global race relations/the corporate university. Just today, Laura Shepherd brings much more nuance to the debate in her Disorder of Things post. She acknowledges a loooong list of reasons we might hate the idea of Jolie Pitt as Professor, but argues that ultimately its not fair to focus on her beauty/celebrity and bypass her experience and cred.

I haven’t actually read many critiques that focus on AJP’s beauty or celebrity- or at least not exclusively. For me, the frustrating thing has been the undue focus on whether AJP is sincere/dedicated enough. Those that support AJP argue that her long-standing dedication and commitment is currency for expertise, while those who oppose AJP try to undercut her ‘true’ dedication, arguing that her likely narcissistic motivations make her unqualified to teach gender and war. The arguments boil down to: ‘she’s sooo amazing and how could anyone do such difficult and important work and not have some expertise to offer’ VERSUS ‘these roles satisfy her own ego/image and she probably doesn’t even recycle.’  To be honest, I could give a flying F about AJP’s dedication. Donald Trump believes he is dedicated to securing America; clearly, dedication does not equal expertise. So let’s move on to experience.

Shepherd reminds readers that AJP has been special envoy and ambassador and been on 50+ field trips. I’m sure there is a whole host of other honors, roles, trips, and experiences AJP has had; however, offering these details as evidence that she deserves more credit and that she is, indeed, some form of expert is an epic stretch.  Here are 3 reasons why we cannot read AJP’s cv as relevant Professorial experience and 1 argument about why, ultimately, the ‘real’ argument is about whether enlightenment, neocolonial, patronising awareness raising looks better when done by AJP, Bono, or Trump.  END_OF_DOCUMENT_TOKEN_TO_BE_REPLACED

If you haven’t read Pablo K’s piece on Angelina Jolie, celebrity, and the Global Summit on Ending Sexual Violence in Conflict, you should. There has been some broader discussion about the pros (see ‘Hollywood can actually help solve complex global problems‘) and cons of celebrity ‘endorsement’ (the foreign secretary was ‘starstruck’) of humanitarian issues- the Angelina Jolie ‘effect’, if you will. One thing that is certain, the headlines were certainly all about Angelina. “Angelina Jolie hosts/says/opens/kicks off…” were the most prominent headlines, with the content, issues, debates of the summit largely left out. Out of curiosity, I created a wordle map of the headlines. I took a blunt method of taking the headlines from the first three pages of google news for ‘global summit on ending sexual violence.’ To cut out the obvious, I deleted ‘global end sexual violence summit’ and here’s what the headlines looked like: 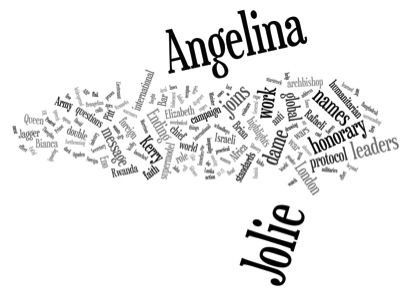