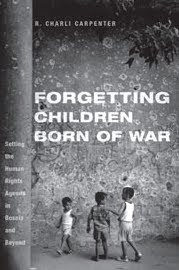 My new book, Forgetting Children Born of War: Setting the Human Rights Agenda in Bosnia and Beyond is finally out from Columbia University Press.

Basically, it’s all you never wanted to know about why children born of wartime rape have been overlooked by the human rights movement for the last two decades, and how this could be changed. Here’s what’s on the back cover:

Sexual violence and exploitation occur in many conflict zones, and the children born of such acts face discrimination, stigma, and infanticide. Yet the massive transnational network of organizations working to protect war-affected children has, for two decades, remained curiously silent on the needs of this vulnerable population.

Focusing specifically on the case of Bosnia-Herzegovina, R. Charli Carpenter questions the framing of atrocity by human rights organizations and the limitations these narratives impose on their response. She finds that human rights groups set their agendas according to certain grievances-the claims of female rape victims or the complaints of aggrieved minorities, for example-and that these concerns can overshadow the needs of others. Incorporating her research into a host of other conflict zones, Carpenter shows that the social construction of rights claims is contingent upon the social construction of wrongs. According to Carpenter, this prevents the full protection of children born of war.

I posted a sneak preview of the first chapter a couple of years ago, here.

Where is the Global Attention to Children Born of War?

Went on BBC World for the first time yesterday to talk about protecting children born as a result of sexual violence in conflict zones like Darfur, Bosnia, Rwanda, East Timor, you name the conflict zone where rape has been endemic, you’ll find a host of children growing up in the aftermath.

The segment just before my interview focuses on children conceived during the Rwandan genocide.

As I describe in my interview and as the volume of essays I published last year details, these children are often (though not always) treated rather badly in the aftermath of wars, either by their states, local communities or sometimes their traumatized mothers.

The big puzzle for me as a scholar of global agenda-setting in the human rights area is that lack of attention to these children by the international community. 300,000 child soldiers galvanizes the Security Council, but half a million or so children at risk of infanticide, neglect, abuse, social exclusion or statelessness remain invisible.

I wrote about this before and talk about it a bit on the segment. Am continuing to collect thoughts on the matter from anyone who cares to ruminate on a grim and depressing topic. Your comments will help me refine an argument for my new book about how the human rights network exercises an agenda-denying as well as agenda-setting function.

Here’s one of my theses: nobody owns an issue like this. Child protection agencies think of stigma against children born of rape as a gender-based violence issue. So they assume that women’s groups are covering it. Gender-based violence experts tend to focus on the trauma to the direct victims of rape, not long-term inter-generational effects on their babies. They see the protection of those children as falling to the child protection agencies. So the babies fall through the cracks.

How many other issues or populations are out there that get missed by advocacy organizations because they don’t fit the ideational and organizational turf of the NGO sector?

What other factors explain this or other such cases?