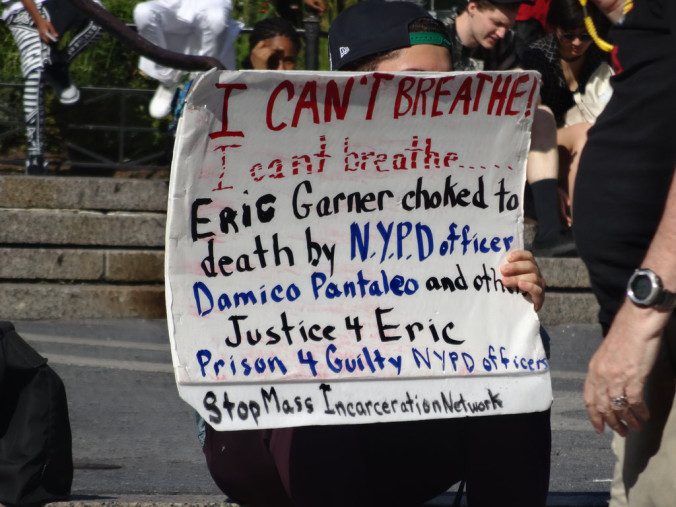 What Does the Rise of AI have to do with Ferguson and Eric Garner?

One might think that looking to the future of artificial intelligence (AI) and the recent spate of police brutality against African American males, particularly Michael Brown and Eric Garner, are remotely related if they are related at all. However, I want to press us to look at two seemingly unrelated practices (racial discrimination and technological progress) and look to what the trajectory of both portend. I am increasingly concerned about the future of AI, and what the unintended consequences that increased reliance on it will yield. Today, I’d like to focus on just one of those unintended outcomes: increased racial divide, poverty and discrimination.

Recently, Stephen Hawking, Elon Musk, and Nick Bostrom have argued that the future of humanity is at stake if we create artificial general intelligence (AGI), for that will have a great probability of surpassing its general intelligence to that of a superintelligence (ASI). Without careful concern for how such AIs are programmed, that is their values and their goals, ASI may begin down a path that knows no bounds. I am not particularly concerned with ASI here. This is an important discussion, but it is one for another day. Today, I’m concerned with the AI in the near to middle term that will inevitably be utilized to take over rather low skill and low paying jobs. This AI is thought by some as the beginning as “the second machine age” that will usher in prosperity and increased human welfare. I have argued before that I think that any increase in AI will have a gendered impact on job loss and creation.   I would like to extend that today to concerns over race.

Today the New York Times reported that 30 million Americans are currently unemployed, and of that 30 million, the percentage of unemployed men has tripled (since 1960). The article also reported that 85% of unemployed men polled do not possess bachelors degrees, and 34% have a criminal background. In another article, the Times also broke down unemployment rates nationally, looking at the geographic distribution of male unemployment. In places like Arizona and New Mexico, for instance, large swaths of land have 40% or more rates of unemployment. Yet if one examines the data more closely, one sees an immediate overlay of unemployment rates on the same tracts of land that are designated tribal areas and reservations, i.e nonwhite areas.

Moreover, if one looks at the data supported by the Pew Institute, the gap between white and minority household income continues to grow. Pew reports that in 2013, the median net worth of white households was $141,000. The median net worth of black households was $11,000. This is a 13X difference. Minority households, the data says, are more likely to be poor. Indeed, they are likely to be very poor. For the poverty level in the US for a household containing one person is $11,670.   Given the fact that Pew also reported that 58% of unemployed women reported taking care of children 18 and younger in their home, there is a strong probability that these households contain more than one person. Add these facts regarding poverty and unemployment an underlying racial discrimination in the criminal justice system, and one can see where this going.

Thus what we see from a very quick and rough look at various types of data is that poverty, education, crime and the justice system are all racially divided. How does AI affect this? Well, the arguments for AI and for increasingly relying on AI to generate jobs and produce more wealth and prosperity are premised on this racist (and gendered) division of labor.  As Byrnjolfsson and McAffee argue, the jobs that are going to “disappear” are the “dull” ones that computers are good at automating, but jobs that require dexterity and little education – like housecleaning – are likely to stay. Good news for all those very wealthy (and male) maids.

In the interim, Brynjolfsson and McAffee suggest, there will be a readjustment of the types of jobs in the future economy. We will need to have more people educated in information technologies and in more creative ways to be entrepreneurs in this new knowledge economy.   They note that education is key to success in the new AI future, and that parents ought to look to different types of schools that encourage creativity and freethinking, such as Montessori schools.

Yet given the data that we have now about the growing disparity between white and minority incomes, the availability of quality education in poor areas, and the underlying discriminatory attitudes towards minorities, in what future will these already troubled souls rise to levels of prosperity that automatically shuts them out of the “new” economy? How could a household with $11,000 annual income afford over $16,000 a year in Montessori tuition? Trickle-down economics just doesn’t cut it. Instead, this new vision of an AI economy will reaffirm what Charles Mill calls “the racial contract”, and further subjugate and discriminate against nonwhites (and especially nonwhite women).

If the future looks anything like what Brynjolfsson and McAffee portend, then those who control AI, will be those who own and thus benefit from lower costs of production through the mechanization and automation of labor.   Wealth will accumulate into these hands, and unless one has skills that either support the tech industry or create new tech, then one is unlikely to find employment in anything other than unskilled but dexterous labor.   Give the statistics that we have today, it is more likely that this wealth will continue to accumulate into primarily white hands.   Poverty and crime will continue to be placed upon the most vulnerable—and often nonwhite—in society, and the racial discrimination that perpetuates the justice system, and with it tragedies like those of Eric Gardner will continue. Unless there is a serious conversation about the extent to which the economy, the education system and the justice system perpetuates and exacerbates this condition, AI will only make these moral failings more acute.

Terrorism and your neighbor’s sex life

The September Atlantic had a brief note in its Primary Sources section about how “Terrorists are turning more and more to crime to fund violence.” The piece references a Congressional Research Service report that apparently included “bootlegging Viagra” as one source of income.

I guess they’ve moved on from infant formula.

In any case, I did a bit of searching around and found this MSNBC/Newsweek piece from August 2006, which describes an alleged criminal ring in Detroit that was funneling funds to Hizbullah in 2002:

By 2002, Hammoud and some of his colleagues were believed to be running $500,000 worth of cigarettes a week across state lines and expanding into stolen contraband and counterfeit goods, including Viagra tablets. During a three-month period that year, authorities allege, more than 90,000 Viagra knockoffs were purchased, with a plan to sell them as the real thing. “They’re small, they’re high in demand and they’re easily transportable,” says Bob Clifford, a senior FBI agent. “They’re the perfect medium.”

I guess that does sound easier to market than stolen baby food.

It’s not good news for the average American suburbanite.

Looks like all that’s left is rock and roll…wait.