Is McCain about to lose the post-debate?

The good (unreliable) instant polls for Obama are already framing the narrative in an interesting way: given how many pundits called the debate for McCain, the question is why undecided voters saw things differently.

This, in conjunction with the absence of “defining moments,” seems to be driving a growing focus on issues of demeanor and body language.

And here we find some real problems for McCain: his almost total lack of eye contact with Obama and his facial expressions while Obama was talking. Such behavior fits, unfortunately for McCain, into preexisting frames about his temper and his lack of respect for Obama. It also supplies the most obviously material for satire.

Now, I’m not convinced we’re looking at a repeat of the first Bush-Gore debate. Gore trounced Bush but got destroyed by his sighs and eyerolling–which, at the time, I barely noticed but my wife squirmed at and predicted would be used against him. I did, however, comment during McCain-Obama debate that some of McCain’s expressions could get him into trouble, and now I’m starting to think that they will.

And now stories are cropping up concerning audio of McCain apparently swearing during Obama’s reference to McCain’s supposed “Spain gaffe.”

If I were in the McCain campaign, I’d be very worried right now, despite my prior analysis.

Peter’s already made some good points about the debate, but I thought I would weigh in as well.

I should start out with a confession. I’m a politics junkie and an international affairs geek. But I was bored stiff by this debate. And if even I was bored stiff, I imagine a lot of people out there tuned out of the debate before it ended.

Now that I’ve gotten that out of the way, let me turn to some quick impressions.

Obama: “Well, let me just make a closing point. You know, my father came from Kenya. That’s where I get my name….” And so began a weak, weird, and incongruous statement that, as best I can tell, was a flubbed attempt to say something about American soft power.

McCain: “And I — and I honestly don’t believe that Senator Obama has the knowledge or experience and has made the wrong judgments in a number of areas, including his initial reaction to Russian invasion — aggression in Georgia, to his — you know…” Not only did McCain trip over a tacit admission that Georgia started the conflict, but his attack on Obama’s experience fell flat insofar as he delivered them after a long and serious debate between the two men. In trumpeting his own experience, McCain made the point much more effectively than when he accused Obama of being a young whippersnapper.

Collective: is Georgia joining Israel in the pantheon of allies that all politicians have to pledge their fealty to? As much as I want the best for the country and its people, Georgia is not Israel. And the infighting amongst the one-time Orange Coalition, for that matter, is a reason not to rush them into NATO.

McCain: “So let me get this right. We sit down with Ahmadinejad, and he says, “We’re going to wipe Israel off the face of the Earth,” and we say, “No, you’re not”? Oh, please.” Nice line on a dispute that, to be frank, amounts to more sound than fury. Neither an Obama nor a McCain Administration is is likely to differ radically from one another when it comes to meeting with, or not meeting with, our adversaries.

Obama: “Now here’s what we need to do. We do need tougher sanctions. I do not agree with Senator McCain that we’re going to be able to execute the kind of sanctions we need without some cooperation with some countries like Russia and China that are, I think Senator McCain would agree, not democracies, but have extensive trade with Iran but potentially have an interest in making sure Iran doesn’t have a nuclear weapon.” And herein lies one of the key problems with the League of Justice Democracies proposal.

Collective: the features that made this debate boring also, in many ways, reflected well on the two candidates. It isn’t surprising that they both maintain high favorability ratings at this point in the campaign.

McCain, by a hair. He was smoother, spoke with more authority, and dominated the debate once it turned to foreign policy. But this was a narrow victory on points, and I suspect that the McCain campaign would’ve liked more than that.

The pundits, who may have to actually discuss substance for once (but don’t hold your breath).

Really, I think it ends up a push. Both candidates held their own, both got in some solid points, both responded to direct attacks.

So, tactically a push. Strategically, though, I think the tie goes to Obama. Foreign policy is McCain’s strong suit, and where Obama is seen as the weakest. Obama is significantly ahead in the polls. McCain needed a knock-out blow, and he didn’t get it. Obama needed to keep his position and look like he could be president, and I think he did that.

I also think that there are going to be a few things, like “John is Right…” and “you just don’t understand” and McCain’s anger vs. Obama’s calmness, that will play differently to the at-home audience than they do to the insta-pundits on TV. People watching at home tend to pick up on mood, tone, and temperament. It will take a few days to see how this all filters out though.

The further it goes, the more I like this free-wheeling style that allows the candidates to actually go back and forth a bit, responding to each other. I think it gives a bit of insight as to how well they can box their own corner.

Again, Obama says “McCain is right…” I think this might be one of those things that plays better to non-pundit viewers than it does to the talking heads, in that it makes Obama look agreeable. Obama is able to start with an acknowledgment of McCain but then assert his own position. We’ll have to see on this, I guess.

Both of them are landing some solid punches. Obama is holding his own, he’s conversant and convincing on key issues. McCain is able to demonstrate that he’s well versed on key defense and national security issues.

The thing is, I think that in this case, the tie goes to Obama.

Update: McCain’s keeps saying Obama doesn’t understand. I think, though, that Obama has strong enough answers to indicate that he does understand. I also think the format of the debate helps Obama on this, as it allows him to respond directly when McCain raises an issue. Of course, Obama follows up with a “John is Right…”….

Who needs a MSNBC when you can have these guys giving post-debate analysis?!?!?! 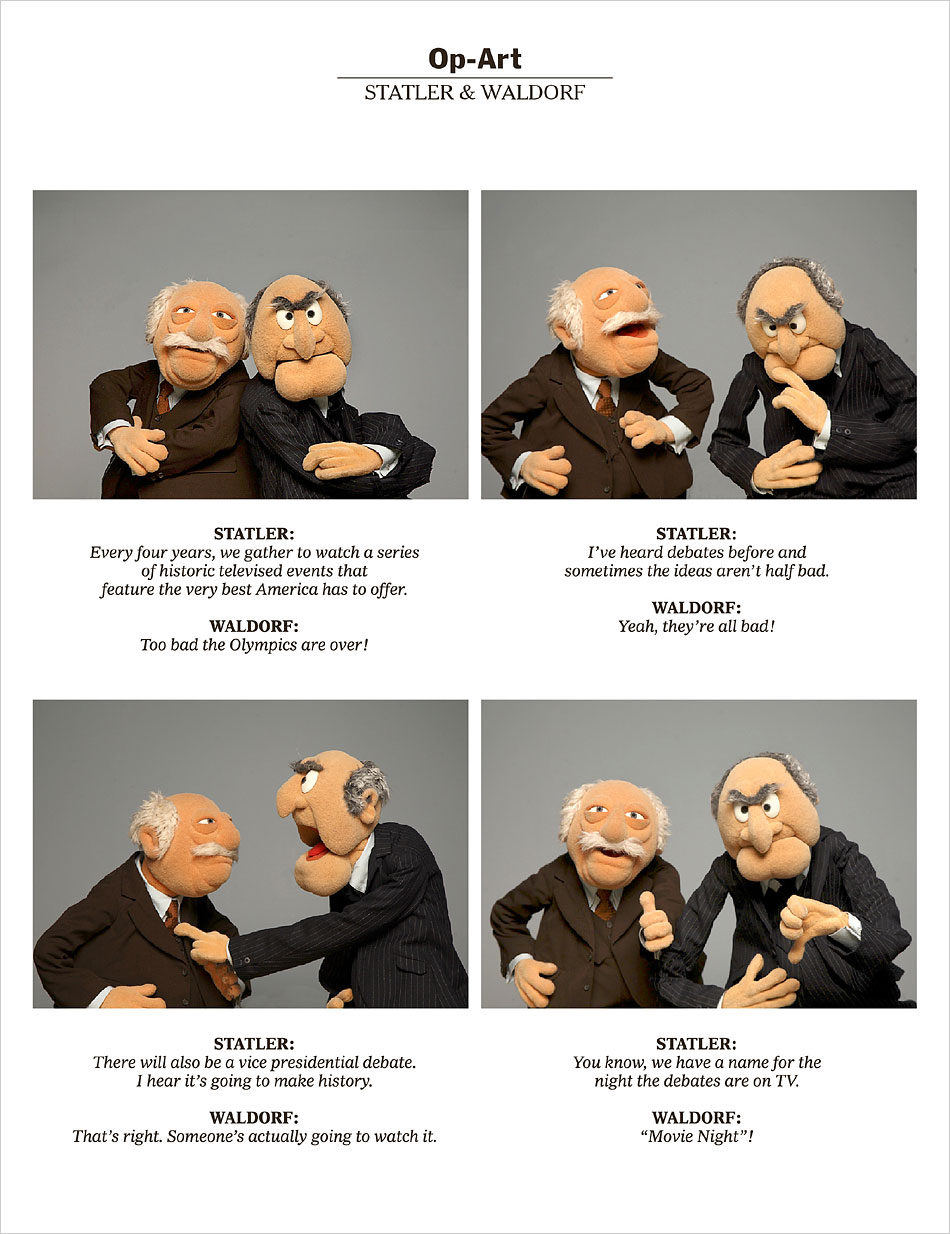 If this prompts a moment of nostalgia, try this.