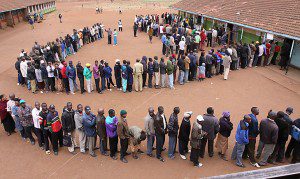 Polls in Kenya closed 16 hours ago, but votes continue to be counted.  Those familiar with Kenya and with the electoral crisis of 2007-2008 will know to distrust provisional results.  In December 2007, challenger Raila Odinga seemed substantially ahead during much of the early voting, only to see that lead evaporate as returns came in from more remote districts. Despite this qualification, it does look increasingly likely that Uhuru Kenyatta will gain the presidency in the first round of voting.*  In the past two weeks, there was some speculation that Kenyatta might struggle to meet new requirements for national distribution of the vote, but he’s already achieved the 25% votes bar in 32 counties. Kenyatta is currently under indictment by the International Criminal Court for his involvement in the 2008 post-election violence; if elected, he would be the first democratically elected leader to go on trial at The Hague.

I want to make one quick note before turning off the Twitter feed and going to bed.  The Kenyan Independent Electoral and Boundaries Commission (IEBC) gambled big with technology this election.  The newly created IEBC instituted biometric voter registration, electronic voter rolls, and electronic transmission of polling station results via cellular network.  It is likely that the slow pace of processing BVID accounted for some of the enormous lines during the first half of the day.  After numerous problems, the IEBC eventually instructed polling agents to abandon the electronic voter roll in favor of the manual roll.  Nor has the count proceeded without hitches. There were nail-biting moments earlier tonight, when a server failure and insufficient hard disk space caused the electronic transmission of results to IEBC to halt for several hours.