My Enduring Rivalry Endures: What is a Credible Signal Anyhow?

Previously, on Rathbun’s Enduring Rivalry: Brian is locked in an enduring rivalry with this neighbors in which he does not really understand why they are mad at him and why they won’t take yes for an answer, which makes him really, really mad and inclined to do anything possible to drive them crazy and make them look stupid. As it always does, this takes the form of ridiculing their behavior through the construction of yard tableaus that mock the triviality of their complaints. Another neighbor calls it the “best public art installation in the history of Stratford Avenue.” Brian appreciates the compliment.

To bring everyone up to speed, there have been a couple of new developments in my enduring rivalry. A couple of months ago, tired of having the police called on me every time I played the drums, which I only did during the weekdays during work hours, I did some amateur soundproofing. At the advice of someone at Home Depot (Yes, I recognize that seems like a paradoxical statement), I bought some styrofoam insulation boards, and suspended them around the drum set to create a kind of box that would muffle the sound. I did this on a Saturday and tested it out for a minute, with my wife inside to tell me if it worked. END_OF_DOCUMENT_TOKEN_TO_BE_REPLACED

Oh crap, I think I am in an enduring rivalry 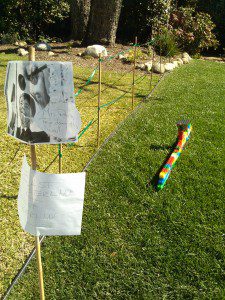 I think one of the most interesting findings in all of international relations scholarship is that the disproportionate share of conflict in the international system is comprised of a few dyads fighting over and over, what are known as “enduring rivalries.” These are highly emotional conflicts in which countries are found to fight because they have fought before, not because of the presence of some tangible and intractable conflict of interest.

I avoided this work for a long, long time for a number of reasons. First, “rivalries” is a terrible, terrible moniker for what is being described and it made me not take it seriously. Rivalries sounds like Yankees-Red Sox. In reality these are at the very least like Manchester City/Manchester United in which fans actually hurt each other. Second, the enduring rivalries crowd does a really bad job drawing the consequences of their findings for international relations theory, I suspect due to the research tradition’s roots in peace research in which numbers and pushing the research agenda step by step are favored over grand theoretical statements. That is unfortunate because there is an enormous implication here. The international system is not conflict-prone due to anarchy. The international system does not really have a character at all. If it does it is mostly peaceful. Realists draw excessive conclusions from micro-level conflicts that have their own unique origins.

I think readers will be sad to hear, therefore, that I think I am in enduring rivalry with my next-door neighbors. Or if they do rational choice work or study Africa, perhaps they will be happy. Either way, let me explain. END_OF_DOCUMENT_TOKEN_TO_BE_REPLACED