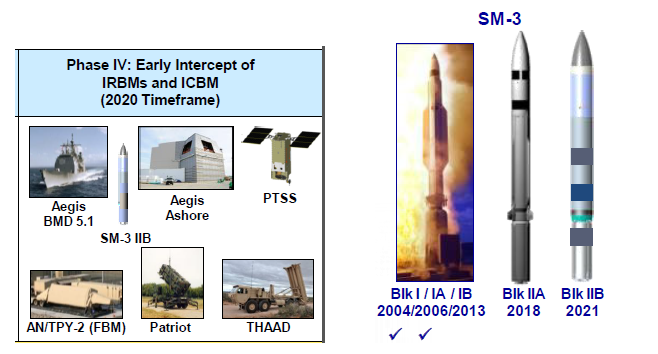 Secretary of Defense Chuck Hagel de facto announced on Friday that the US will scrap deployment of ground-based ballistic-missile interceptors in Poland and Romania.

At a Pentagon press conference today, Secretary of Defense Chuck Hagel announced that the planned deployment of the high-speed SM-3 Block IIB interceptor to Poland (and the corresponding 4th phase of European Phased Adaptive Approach) has been cancelled. The transcript of Hagel’s prepared statement only states that the Block IIB programmed was being restructured, but the discussion in the following press conference makes it clear that the deployment plan has been cancelled:

In response to a question at the press conference, James Miller, the Undersecretary of Defense of Policy said (my transcription from C-SPAN video):

In the prior plan, Block IIA interceptors would have been deployed in Poland as part of Phase III of the EPAA and then in Phase IV some or all of these would have been replaced by Block IIB interceptors. Whether the Block IIB development program is completely dead is unclear. This is a very significant development given that the Block IIB was the single greatest source of Russian objections to U.S. missile defense activities. Although there are certainly also good technical and economic reasons for cancelling the Block IIB, it will thus inevitably be portrayed as to be a major concession to Russia. Whether it will be actually be enough to satisfy the Russians remains to be seen, as many Russian statements have also objected to the unlimited deployment of the high-speed (although not as fast) Block IIA interceptor.

As was clearly the goal of the press conference, most media attention focused on the comparatively minor announcement that the number of deployed GBI interceptors in the U.S Ground-Based Midcourse Defense (GMD) system covering the United States would be increased to 44 from the current 30. This involves deploying 14 additional GBI interceptors into 14 already existing silos (although in some cases, these silos need extensive refurbishing – see my post of March 28, 2012 for details) by the end of 2017. The planned number of interceptors was already at 44 when Obama took office, but his administration quickly cut this back to 30, citing a lack of a threat. Since then the possibility of restoring the number of interceptors to 44 has frequently been portrayed by the Administration as a possible hedge against future changes in the threat.