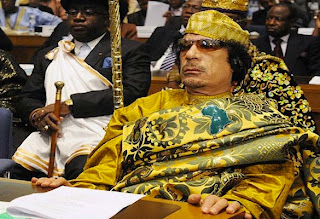 As much as the proposal to put Mummar Gaddafi’s outfits up for display at the Costume Institute of New York should be true in a fully just world, I would imagine that it isn’t.

Alas, the West shall be deprived of “four decades of Colonel Gaddafi’s superior dress sense”. And we are weaker for it.

However, this did get me thinking. Could Libya make a plausible case that Gaddafi’s outfits (which have been out-Gaga-ing Lady Gaga since well before she was born this way) are in fact ‘cultural property’ under the 1954 Hague Cultural Property Convention?

According to Article 1 of the treaty:

For the purposes of the present Convention, the term “cultural property” shall cover, irrespective of origin or ownership: (a) movable or immovable property of great importance to the cultural heritage of every people, such as monuments of architecture, art or history, whether religious or secular; archaeological sites; groups of buildings which, as a whole, are of historical or artistic interest; works of art; manuscripts, books and other objects of artistic, historical or archaeological interest; as well as scientific collections and important collections of books or archives or of reproductions of the property defined above;

And how could you argue that this isn’t a “work of art”?

If a plausible argument can be made there are some serious targeting implications for NATO. (Provided, of course, the Libyans first mark off where the outfits are with the appropriate sign.)

You know, everything that didn’t happen in Iraq.

Of course there is also “immunity from seizure,capture and prize” – so none of the European military advisors on the ground will not suddenly be wearing lots and lots and lots of gold braid.

Oh – and even if the Libyan conflict is not of an international character (Certainly the NATO campaign is, but the civil war might not be!) there are still fundamental guarantees under Article 19:

For the sake of humanity, will no one think of the Paco Rabanne sunglasses? 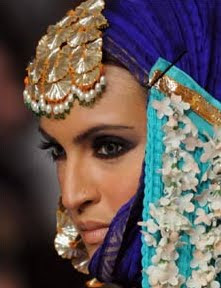 The security situation in Pakistan has become so synonymous with mayhem, violence and the threat of state collapse that the Human Security Report Project has just launched a new blog, the Pakistan Conflict Monitor.

In the context of those developments, the thriving civil society, democratic sentiment and rule of law in many parts of Pakistan are easy to forget. Matt Barlow writes at Current Intelligence about why we should pay as much attention to fashion shows in Karachi as to clashes in Waziristan, in order to grasp the complexity of Pakistan’s changing times.