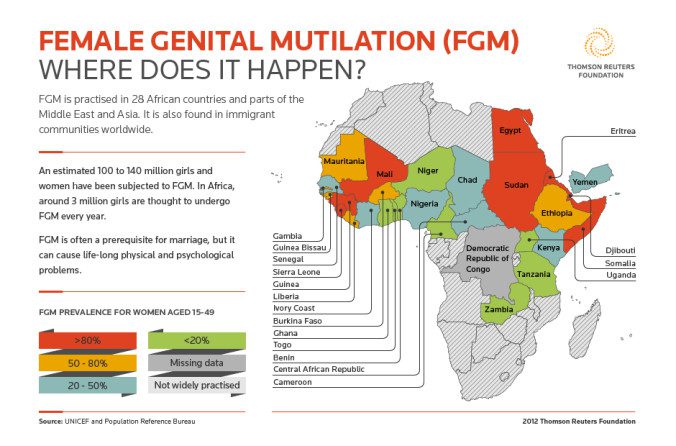 In his new song “Tomber la Lame” or “Drop the Blade,” Burkina Faso hip-hop artist Smockey has an amazing call to end the practice of female genital mutilation (FGM), a procedure that remains widespread in parts of Africa and the Middle East that removes a piece of a girl’s genitals with a knife so that she won’t experience sexual pleasure as an adult and, so the logic goes, be less likely to stray from her husband. It’s a horrifying practice, but one that foreign groups fought with limited success until local change agents and organizations like Senegal’s Tostan took up the mantle.

Smockey is a middle-aged married guy so having a man advocate an end to FGM makes for an interesting messenger. He himself argues in this PRI interview that woman are the main bearers of the tradition, which I’m not sure is exactly true or indeed an artifact of him speaking in his non-native tongue.

One of the most important observations of the transnational social movements literature over the past couple of decades is the importance of locally resonant messages and messengers (here Amitav Acharya’s 2004 IO piece Whose Norms Matter is an exemplar). Having foreign actors champion norms is often a recipe for a local backlash, though certainly history is rife with foreign actors trying to change local beliefs, whether it be through proselytizing religion or related campaigns to stop cultural practices like female footbinding (documented in Keck and Sikkink’s masterful Activists Beyond Borders).

Thus, the success of Tostan, documented in Molly Melching’s autobiography, and future success of efforts like Smockey’s is a function of local actors with deep roots in their communities persuading their peers to change practices and outside actors, where they are involved in such struggles for cultural change, finding local interlocutors to carry the message forward.