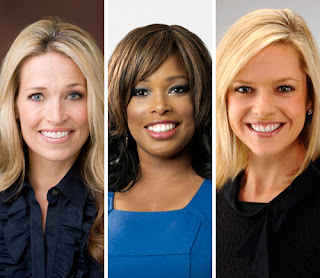 Like Megan, I think that Naomi Wolf’s post on Al Jazeera is dumb, dumb, dumb. Wolf gets it completely wrong because the whole popularity of Palin and Bachmann (particularly the former) is a function not of feminism, but of the ‘new chauvinism.’

What do I mean by that? The feminist movement has of course radically transformed American society. Women have broken into some of the last bastions of male dominance — the sports locker room and the newsroom. But we aren’t going to let them in if they aren’t hot…..

Stay with me. Don’t get offended. When I say we, I really mean conservative males, which isn’t really me. Palin and Bachmann’s appeal to conservative women is not very surprising. It seems that thankfully all women these days believe that they have a right to a successful career AND a family, conservative women included. This is the victory of feminism and what Palin might represent. But women still might believe in traditional values as long as they don’t have to stay in the kitchen. They just carved that part out of social conservatism and kept the rest.That kind of ideological transformation takes place all the time. It is not like Democrats have always been big on gay marriage.

So the puzzle of Palin’s appeal is in her appeal to conservative males, who are, more likely to be more chauvinistic than weeny, fancy-glasses-glasses-wearing academics (not nerds!) like me. Survey data I collected show that conservative men like her just as much as ideologically like-minded women. Here we have seen a shift. Men are OK with women even in the inner sanctums of their maleness, like sports. The feminists won that battle. But they better be good looking. Look at the picture of the three female sideline sports reporters for major networks above. What links them? They’re all physically attractive. I have not seen an unattractive female sports anchor, but there are plenty of fat, balding men. Unless we want to argue that among women there is a correlation between sports IQ and physical attractiveness, this is unjust. But this is the price that men insist on to be in the club. I am sure that all of these women know sports up and down, but that is only a necessary not a sufficient condition to get a job on TV doing work in sports.

We see this at Fox News too, of course. Many have remarked on how Fox newswomen are disproportionately blond and attractive (see picture). Well of course. The average conservative male viewer of Fox might put up with a woman delivering the news, but she better be purty.

An insistence that women in high places reserved historically for men be attractive is of course chauvinistic, just chauvinism of a different kind. Sarah Palin is popular among conservative men because she is the most physically attractive female politician I can think of. I can imagine that this could be offensive to feminists, that I am reducing Sarah Palin’s popularity to her physical characteristics rather than her abilities and intelligence. But then you’d be arguing that Sarah Palin had abilities and intelligence, and I don’t think that is an argument that you’d want to be making. Unlike Hillary Clinton, there is nothing else going on there. Men do not like Palin for her brains. You can google “Sarah Palin porn look-a-like” and you will get doctored pictures of her. That isn’t true of Diane Feinstein. (Please, please do not click on these images, though. You will get a virus for certain. Computer virus, not STD, of course.)

As for Bachmann, I would put more weight on saying crazy shit. Insane people used to be somewhat filtered out of the mainstream media by the heavies who deemed them unnewsworthy. But now they are especially newsworthy. Why? Because they’re crazy of course!

To be fair, this chauvinism might be true of liberal men viewing CNN too; they just like more ethnically diverse women like Soledad O’Brien. In which case, all men are dogs. But I suppose women already knew that. I do, however, take great comfort from Candy Crowley.