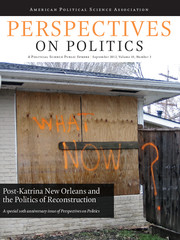 From Jeffrey C. Isaac, the editor of Perspectives on Politics:

I am very happy to report that Melissa Harris-Perry just held up a copy of the new Perspectives on Politics on her MSNBC show and quoted me (!!) about “Post-Katrina New Orleans and the Politics of Reconstruction,” the theme of our new 10th anniversary issue!! The “play” she gave our journal on the air was greatly appreciated….

I believe that the current issue of Perspectives is the first issue in the history of APSA journals to be a special issue (at 300 pages!), timed to come out in advance of the annual meetings, to address a major issue linked to the meetings, in this case the site of the conference itself, a major city with huge practical and symbolic importance in American public life.

We do the work that we do for the Association and with the goal of continuing to “grow” and improve Perspectives as a journal that is scholarly, engaging, and relevant.

And we are happy that this work can play some small role in contributing to the public esteem of our profession and our Association….

Our special 10th anniversary discussion/reception, will take place on Friday, August 31, from 4:15-6:00 pm in Sheraton Rhythm 1. This event is being billed as “Perspectives on New Orleans and the Politics of Reconstruction: A Discussion of Perspectives on Politics with the Editors.” There will be a brief introduction thanking the many people who have contributed to the journal; brief presentations by Edwina Barvosa, Henry Farrell, Elizabeth Markovits and me; and then informal discussion, all in the context of a reception featuring wine, beer, and hors d’oevres, courtesy of APSA and Michael Brintnall. Please come to this event if you can, and please spread the word, and encourage your friends, colleagues, and students to attend.

I’ll have more to say about the ISA conference in a few upcoming posts, but let me begin with some comments on the host city. ISA was held in New Orleans, in part, to provide a lift for the city after Hurricane Katrina five years ago. Somewhere around 5,000 folks descended on the city with cash in hand to help the local economy. The conference started the day after Mardi Gras and came less than two weeks after the Saints’ Super Bowl victory. A lot of locals commented that the previous two weeks really were the best two weeks for the city in years. Indeed, walking around the French Quarter, it was easy to forget about Katrina.

But, I joined Leslie Vinjamuri, Stephen Hopgood,and Lise Howard for the Grey Line bus company’s Katrina tour (check out the video in the link). It’s a bit uncomfortable being a “disaster tourist,” but all four of us have done work on humanitarian relief and recovery, post-conflict transitions, and state building in other countries. It was eye-opening to see similarities here in a US city to many of the things we study abroad.

The city still bears serious scars of the disaster. Five years after the hurricane, there remains extensive devastation (abandoned and heavily damaged houses and businesses) and limited rebuilding in parts of New Orleans (notably the lower 9th Ward). I have traveled and worked extensively in the Balkans over the past fifteen years. There was less lasting devastation and more rebuilding in Sarajevo and even in Mostar by 2000 (five years after the war) than there is in the poorer districts of New Orleans five years after Katrina — though neither Sarajevo nor Mostar were picnics.

Whether its disaster recovery or post-conflict reconstruction, the story is really how to go about building institutional capacity to create appropriate incentives for populations to return, to alleviate poverty and develop mechanisms to ensure a base-level distribution of wealth, to facilitate functioning (and functional) markets, and to establish conditions for local communities to govern and adjudicate competing claims on authority. In New Orleans, there is a still a significant lag in all of these. About one-third of the city’s pre-Katrina population left and likely will not return, poverty is rampant, property rights remain in flux, institutional mechanisms to encourage and protect investments are absent (i.e., available credit and sufficient insurance pools against catastrophic loss), and economic development and employment opportunities are largely stalled.

I don’t want to overstate the parallels between post-Katrina New Orleans and cases of post-conflict transition (there are significant differences) but I think New Orleans is worth a closer look for anyone working on international cases of reconstruction, development, and state-building.

The International Studies Association meeting is getting underway shortly in New Orleans. I’m not sure who’s very strange idea it was to combine academics and “Mardi Gras” – (I can’t wait to see the “Professors Gone Wild! Video…. Actually, I can… ) but we’re here and letting the bon temps rouler – as it were.

Of course this year’s Mardi Gras has a very important unofficial theme – the New Orleans Saints – who won the Superbowl this year. There are gold fleur de lis everywhere and on everything. I ran into a publisher last night who swore that he ran into a group of people who hadn’t stopped celebrating the victory since last Sunday.

Yet the joy of the Saints isn’t for New Orleans alone. It seemed that much of the Western world was cheering for them to win too (outside of Indianapolis, I guess.) Even in the UK, the Times posted a video (linked above) with their very posh writers saying “Who Dat?” to the camera.

I think this follows on my (slightly cranky) post this weekend which suggested that no one outside of North America was really interested in the Olympics, largely because Canada is boring (aside from other geopolitical considerations). Unlike the Beijing Olympics, there is no story behind the story.

But the same was not true for this year’s Superbowl, which NBC claims was the most watched TV event ever. (Although not everyone agrees.)Internationally, the Saints were so popular because they were seen as literally embodying New Orleans and its rise after Hurricane Katrina. The Superbowl in the UK was not just some strange American game broadcast on the BBC at 11pm. It was a highly symbolic match which represented a passionate American story… the kind the Europeans love to sink their teeth into.

The same thing could be argued about the New England Patriots when won the Superbowl in 2002. The nationalistically named team became symbolic of America’s rise after 9/11 and the imagery of that Superbowl was deliberately tied to 9/11. This may actually be a significant difference with the last Superbowl – that much of the linkage to Katrina was not as deliberate or politically motivated. Rather it this year it seems to have been done so by a media trying to push a story.

So, do we need stories behind the stories in order to better appreciate sports? Could the same be said about chess matches in the Cold War – where entire nations nervously bit their nails while uber-nerds of the superpowers battled it out? (I’m assuming that without the Cold War tensions that 99% of the attention to those matches probably wouldn’t have been there.)

I’m uncertain, but on the surface, it certainly seems to help.