Tag: I am not a role model 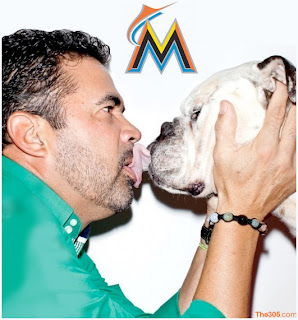 I am headed out to Coachella this Thursday for three days of music in the desert. Well, two days. I am too old to make it all the way through, and I have to teach on Monday. In any case, I thought I would offer this Friday anti-nerd blogging column a little early in the week. For those of you teaching or taking classes on the semester system, it is that time of year that you are very, very tired. You need the break a bit in advance.

The MLB team, the Marlins, just suspended their manager, Ozzie Guillen, for complimentary comments he made about Fidel Castro. The Marlins play in Miami where they have this little minority constituency that seems to gets its way from time to time. Or every time.

Please do not look to this man for foreign policy insight. This should be self-evident

I am going to go out on a limb and say that anything that a professional baseball player, or even coach, says about politics does not matter whatsoever. Ozzie Guillen is clearly something of an idiot, but this is something that we should expect of our athletes. Even cherish. Let’s apply that same rule to every sport. In general there should be no penalty for what people who know nothing about politics say about politics, even if they are in the public eye. So we can forgive the Dixie Chicks, Kanye West, and even Ted Nugent. We can make fun of them, call them ignorant. Indeed we should. But for them to lose their job over it, even if just for a few days, is very, very dumb. The guy should not even have to apologize. If everyone had to say sorry for being an idiot, there would not be much time left over. I have now just satisfied my lifelong ambition to mention Ted Nugent in a blog.

Guillen isn’t a leftist, communist revolutionary, or an apologist for dictatorial regimes. He simply admires, he says, Castro for his amazing staying power. Despite being an international and domestic pariah he has held on to power for decades (Castro, not Guillen). In other words, Guillen appreciates that Castro is a tough and stubborn son-of-a-bitch. I think we can all agree that, even if we not quite call it a merit, Castro is indeed a tough and stubborn son-of-a-bitch. I find this whole event somewhat funny in that it has transpired at a moment in American politics in which the greatest asset for a political figure, at least voters claim, is principled conviction and an unwillingness to back down.

In general, I think that the American public needs to take a really big collective breath and chill the f*ck out about what people say. It is far more important what people do. Does Ozzie Guillen diddle little boys? Not that we know of? Then let’s all just shut the f*ck up.

The same goes for politics. If Rick Santorum calls Mitt Romney “the worst possible candidate,” it should not be news because it does not matter. It does not tell us anything about either Rick Santorum or Mitt Romney except that they probably don’t like each other. Duh. It just seems to me that we all are all on the constant look-out for something that offends us. We want to be outraged. What does that say about us? What’s with the axe to grind? I say let the offense come to us. And let’s wait for something really offensive.We can blame it on the news media, but my guess is the first thing we all tweet, facebook, etc., is dumb shit like this. They only do it because we watch it.

In other words, the public needs to be more like IR scholars, who don’t give two shits about rhetoric and talk. I think this is actually a big, big problem, and it is something that some are trying to correct like Ron Krebs, Stacie Goddard, Jennifer Mitzen, Jarrod Hayes and Patrick T. Jackson. But for our own domestic politics, we would do well to heed the lesson that so much of this is unimportant fluff.

OK, off to hang out with the hipster doofi. Lates.