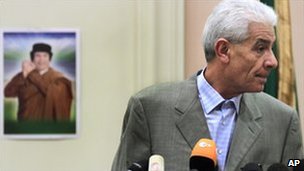 The arrival in the UK of the Libyan Foreign Minister and former Head of Intelligence, Moussa Koussa, raises some interesting questions. Consider the facts: one the one hand, although Moussa Koussa has, apparently, been a force for moderation in recent years, in his heyday he was an unapologetic defender of the use of force against Libyan dissidents and other opponents of the regime. Quite possibly he planned the Lockerbie and Niger airline bombings, and, if he didn’t, he knows who did and was complicit in the crime and in other acts of terrorism by Libya.  In short, there is a prima facie case that he has committed crimes against humanity for which he should answer in the appropriate national courts or at the ICC in the Hague.  The British Government is insistent that he hasn’t been given any kind of guaranteed immunity from prosecution – and, indeed, no national government would be in a position to give such a guarantee.

On the other hand, it is clearly very much in the interests of the people of Libya that as many as possible of Gaddafi’s associates jump ship, indeed that Gaddafi and his family themselves leave the country, and it is equally clear that the possibility of prosecution in an international court makes this outcome less not more likely. Given a choice between spending the rest of his life in prison in the Netherlands or holding out in Tripoli and hoping that something will turn up, Gaddafi will probably choose the latter, even if the most likely endgame involves a last stand in the family bunker rather than continuing stalemate.  In short, building a golden bridge to allow your enemy to flee (or, more prosaically, providing a safe conduct for a journey into exile) is good realpolitik – but in this case it would also probably save lots of Libyan lives.
I suggest there is a clear difference here between the interests of the international community in seeing crimes against humanity punished as a way of deterring future criminals, and the interests of the Libyan people in removing a criminal regime as effectively and painlessly as possible. The Chief Prosecutor of the ICC disagrees; he regards punishing crimes against humanity, in simple terms, as a matter of law and order. Criminals should be tried and if convicted, punished; plea bargains if they co-operate are in order, but immunities and safe-conducts are not, even if the people most directly concerned, in this case in Libya, would be prepared to countenance them.  Even if the overwhelming majority of Gaddafi’s victims were, and are, Libyan (certainly the case, even taking into account his foreign activities) it is not up to the Libyan people to decide his fate – these are crimes against humanity.   Punishing such crimes is in everyone’s interests, including the interests of the Libyan people – there is no clash here.
I’m unconvinced. Here’s a hypothetical; one of the great achievements of the 1990s was the peaceful transfer of power in South Africa, which was based on a deal struck between De Clerk and Mandela to the effect that the crimes of the Apartheid era would go unpunished – there would be a Truth and Reconciliation Commission but no trials of those who defended the Apartheid state.  Suppose, during the negotiations De Clerk and his associates had gone to London and been arrested there (as an assertion of universal jurisdiction over crimes against humanity) to stand trial for past wrongdoings, and as a result the deal had collapsed and South Africa had descended into chaos. Would such an outcome have been in the general interest? I’d suggest not – too high a price would have been paid by ordinary South Africans for the assertion of a principle.
But I’m well aware that the position I’m arguing here is not without its downside. One of the great achievements of the rule of law domestically is to take matters of justice out of the hands of individuals. Instead of regarding crimes as personal matters to be settled by vendetta, revenge or the payment of money to compensate for blood-guilt, they become offences against the state – in the UK in the Middle Ages, the King’s courts gradually asserted control over such alternative means of resolving disputes, and we still describe criminal trials as Regina vs. the defendant.  Ocampa’s position is that the same principle should apply internationally – we are all the victims of crimes against humanity not just whichever group they were committed against, just as murder in a domestic system is a crime against the whole society, even though there is a specific victim. But is there really an international society analogous to modern domestic society, or are we still in a self-help system where individual states make their own decisions on such matters?