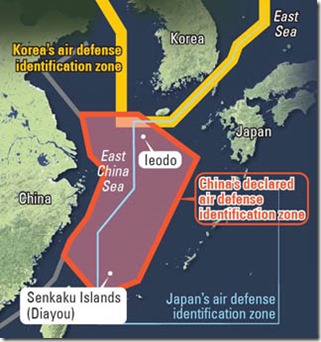 END_OF_DOCUMENT_TOKEN_TO_BE_REPLACED

Structural explanations are not always sexy or gratifying, but they typically explain a lot

In the days after the US midterm elections cable news outlets, radio programs, political pundits, newspapers, and activists on both sides of the ideological spectrum have exerted a great deal of blood and sweat to explain the nationwide drubbing of the Democrats. Democrats are predictably covering their behinds—conceding voter anger, but cautioning that the country has not lurched to the right in just two years. Republicans are claiming validation of their position and a greater ideological alignment with the American people. Activists and enthusiasts of all stripes are weaving narratives that use the election results to validate their personal political perspective. The question, of course, is whether any of this is correct or meaningful. Was this election a mass repudiation of Democratic policies? Was it a validation of the Republican platform and/or Tea Party-style conservatives?

Elections are like Rorschach bots—everyone sees something different, and often times what they see is what they want to see. Particularly with elections, people like to place causation in the hands of people—agents—whose efforts, words, thoughts, etc, drive the outcome. And to be sure, individual agents can and do wield a great deal of influence on events. But an overemphasis on agents can lead to spurious conclusions about why something happens. You must also look at structural or environmental factors.

Over at the Monkey Cage, John Snides has a great piece precisely along these lines. Snides and his colleagues looked at which factors where the best predictors of voter choice:

If you had one thing, and one thing only, to predict which Democratic House incumbents would lose their seats in 2010, what would you take? The amount of money they raised? Their TARP vote? Their health care vote? Whether they had a Tea Party opponent? A Nazi reenactor opponent?

Not surprisingly, it’s none of those.

As is typically the case, the partisan makeup of a politician’s district mostly determines which candidate will win.  Snides and his colleagues found that the 2008 Presidential vote in a district explained 83% of the variation in the 2010 vote share (see graph below). 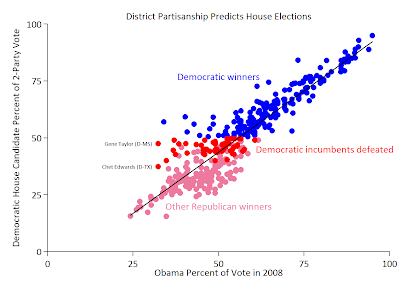 This data does not negate agent-centered factors, but it certainly dulls them.  Additionally, many of the theories being thrown about (the vote was a referendum on Obama, on Democrats, on “Big Government”, etc) just don’t have the explanatory power that the partisan makeup of a district has.

What’s clear is that, structurally speaking, the Democrats were set up for a shellacking.  Historically, the President’s party takes a big hit in the midterms, incumbents are punished in a poor economy (regardless of their control over it), and incumbents in swing districts will be the first to go.  Many of the seats Democrats gained in 2006 and 2008 to take a commanding majority in the House were obtained by targeting vulnerable Republicans in swing districts.  Conservative Democrats ran and won in those districts, meaning they faced a center-right electorate.  Given these structural factors, it is no surprise that the Democrats lost so many seats.

Structural explanations are not very sexy.  They don’t allow a ton of room for debate and analysis after the initial work is done.  By their nature, there isn’t a whole lot that can be done to alter the conditions (i.e. a reduced role for agency).  And they don’t really allow people to indulge in great philosophical and ideological satisfaction.  But, at the end of the day, they can be powerful explanations.  Democrats in 2006 and 2008 were overzealous in their interpretation of what those election results implied, and the same may happen to Republicans in 2010.  Savvy politicians and operatives should take heed.