Lieberman and the Democratic Caucus 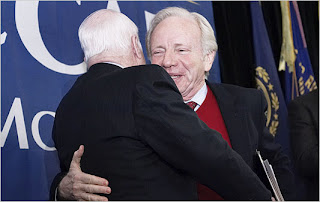 Go to any major left-wing website, and you’ll find an lengthy chorus of commentators ranting against Harry Reid for his failure to kick Lieberman out of the Democratic caucus.

“Lieberman’s speaking at the Republican convention!” they say. “He’s a shill for some of McCain’s worst attacks on Obama!” they exclaim. “The Democrats won’t need him to retain the majority in the next Senate!”

As Theda Skocpol puts it:

I am sorry, but this is ridiculous. Lieberman has the Dems where he wants them. Lieberman knows — and has known for a long time — that he has no future if Obama wins. If McCain wins, by contrast, he goes into the Cabinet. So of course he will push McCain all the way, with no holds barred.

The only thing that would matter would be if they stripped him NOW of his chairmanship and told him he is no longer a Democrat in their eyes. But Reid would have to be willing to give up procedural control of the Senate. And of course he won’t — not even to send the loud message that Lieberman cannot speak as a Democrat against the party’s presidential nominee.

The rest is all useless bluster.

There’s a good reason not to kick him out of the caucus and force him to give up his chairmanship now: that’s the only leverage the Democrats have over what Lieberman says at the Republican Convention.

Think about it for a second. Nobody who might be moved by Lieberman’s speech at the convention will change their minds because he’s been kicked out of the caucus. Throwing him under the bus now won’t change the fact that he was the Democrat’s vice-presidential nominee in 2000.

It is entirely correct that the Democrats won’t need Lieberman–barring a titanic shift in the political environment–in the next congress. Which means that Lieberman’s fate as committee chairman is in his hands. He’s the one who needs to worry about (1) McCain losing and (2) going back to a Senate in which the Democratic leadership doesn’t need him. So it makes perfect sense to take a “wait and see” approach and let Lieberman decide whether he wants to guarantee being stripped of all of his power or not. If they strip him of his power now, he’ll have nothing to lose.

Of course, it probably won’t make any difference. But, still, there’s no reason for Reid to throw away his only trump card now.

Photo by Jacob Silberberg for The New York Times