Taking David Cameron to School……(Literally. This guy is stupid.) 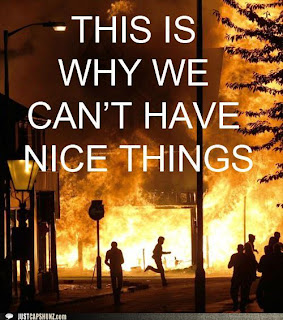 I get most of my European news from the Financial Times, which I admit does make for a somewhat skewed perspective on British politics. You all do still wear top hats and monocles, right? But apparently Britain’s Prime Minister is promoting, earlier than expected in the wake of the London riots, a tax credit for married or co-habiting couples with the belief that a two-parent family makes for a more stable home and fewer young thugs (or righteous freedom fighters railing against the system, either way) looting cell phone stores in the future. Politicians are so stupid.

Let’s take it for granted that the cause of looting lies in the failures of parents rather than of the social environment in which the poor grow up in. I actually do believe that a loving, two parent family is the best way to raise kids, even as it is by no means the only factor. But David Cameron needs a basic lesson in positivistic research design and causality. (Don’t do it, Patrick T. Jackson! Do not pull your hair out every time I use that word inappropriately in a way inconsistent with how science actually operates! It is not worth it! You have lovely hair!)

Generally when single mothers are raising children it is because the guy is kind of a d!&k to begin with. That’s why he left. Or if not, the mom and dad are ill-suited to one another — they fight like cats and dogs. In other words the fact of the single family is endogenous to the crappy relationship, rather than the exogenous cause of the f*&cked-up kid. The Tories are getting the causal relationship wrong. We see this all the time.

So how is providing a financial incentive to keep them in a loveless relationship or keep a deadbeat around going to make for better adjusted kids? Well, it isn’t, David. The key to better kids is better parents, which means some kind of social engineering at a young age to help them learn, ideally before puberty, to resolve conflicts peacefully, not act like they are the center of the universe, etc. Not to change sleeping arrangements.

Also, are the type of people who shack up purely to get a tax write-off the kind of people we want having babies? This is a strange marriage of Reaganite/Thatcherite incentive economics and social conservatism. Those should be separated. Good parents need good values, not more money. Good luck!

How do we do that? I have no idea, but my guess would be education. Yes, that very education budget that is being slashed in the UK right now by the Tories. (That is true, right? Again, I just read the Financial Times, so I only know the market for yachts is stronger than ever. I’m serious– that was an actual article).