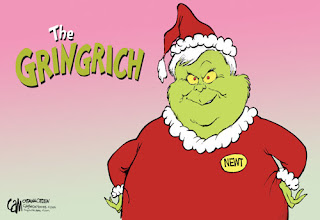 I never, ever, ever thought I would write a blog post about Newt Gingrich’s chances as Republican nominee for President, except perhaps to laugh at him. Yet here I am.

The Republican establishment is lining up against Gingrich, claiming that he is not conservative enough. This is laughable and a red herring. As opposed to Mitt Romney? Instead we should listen to those who were swept into office and/or positions of power with him in the revolution of 1994, like Joe Scarborough. They know him well. Gingrich’s problem is hardly being conservative enough. Rather the real objections center on two other faults. First, he is a blowhard pseud0-intellectual in love with his own ideas and himself. Second, he is an asshole, and I mean that in the most rigorous, social scientific way possible. These are not unrelated, but the latter is I think what explains his rise in this particular climate. Allow me to explain.

If Gingrich gets the nomination, the media is going to make a huge deal of the egghead vs. egghead presidential race. That is silly. Gingrich’s intellectualism is the intellectualism of a precocious 16 year old who just read the Fountainhead — shallow, capricious and grandiose. Next year he/she will have gone goth, or something else. So it is with Gingrich, although though he probably won’t go goth. I think people overstate Barack Obama’s intelligence too. He is smart but not brilliant. Rather what seems him look so smart is his ‘cognitive complexity,’ as I wrote about in one of my first posts here, and is so rare in politicians these days. He can see multiple sides of an argument. But be warned — this will be the narrative if he wins the nomination.

But his ‘intellectualism’ is not why Gingrich is so popular today. I think Gingrich is picking up the votes of the real Tea Party people — those who resent what they imagine to be enormous sums of their tax dollars going to finance what they imagine to be the profligate lifestyles of those on Aid to Families of Dependent Children or Medicaid or both. We call this ‘economic conservatism’ but it is not a belief in the free market. It is a belief that we owe nothing to anyone else. In political psychology we know it has a strong association with a particular personality trait — disagreeableness. In short, Tea Parties are meanies before they are anything else.

Social conservatives score much higher on other personality traits like conscientiousness. They are not nearly so uncaring. They might deny family planning services to unwed mothers, but this is because they think they are doing the right thing by not putting ideas into impressionable girls heads — that it is OK to have sex. Of course this makes them likelier to get pregnant and have abortions. But it comes from a genuinely good if misguided intention. They are mean by accident, indirectly.

Newt’s rise has to be attributed to his performance in debates, since, as was the case with Cain, there is nothing else to explain it — no money, no organization, and only negative name recognition. What has he done at these debates? He has no gimmick, no 9/9/9 plan. He flips around all the time. But every time he shows up on camera, we see the same thing — contempt, scorn, meanness. For everything. Newt is tapping into how nasty these nasty people feel. To others, and at previous times, this would have seemed unpresidential. But these are the times we live in. Newt Gingrich is an asshole, and many Republicans love him for it.

Bolt down your Christmas trees everyone. And for all the Muslims out there, get an alarm system.