I already mentioned that this podcast was coming, but now it is out. From my summary at New Books in Science Fiction and Fantasy:

When I agreed to host New Books and Science Fiction and Fantasy there were a number of authors I hoped to interview, including Michael Gordin. This might come as a surprise to listeners, because Michael is neither a science-fiction nor a fantasy author. He is, rather, a prominent historian of science at Princeton University. But his work intersects with the subject-matter of this podcast in a number of ways. Five Days in August: How World War II Became a Nuclear War asked us to consider what might have been had Tokyo refused to surrender and the US had continued to drop atomic bombs on Japan. Mike will soon start co-teaching a class on invented languages which includes a unit on Klingon. And the main subject of this interview, The Pseudoscience Wars:  Immanuel Velikovsky and the Birth of the Modern Fringe (University of Chicago Press, 2012), touches on both the history of science fiction, key themes within the genre, and where much of its source material comes from. Indeed, while this channel will continue to focus on new books within the SF and Fantasy genres, it will also interview scholars and practitioners whose expertise illuminates and enhances our understanding of those genres.

END_OF_DOCUMENT_TOKEN_TO_BE_REPLACED 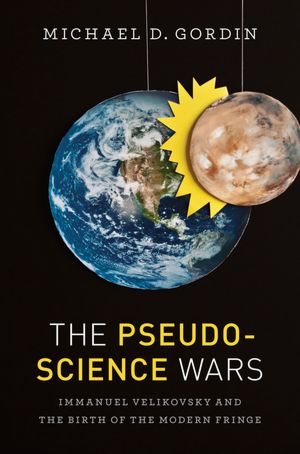 As readers might have surmised, a number of  the bloggers at the Duck are into the philosophy and history of science. PTJ has written an exceptional book on the philosophy of science in the context of international-relations scholarship. Others of us dabble, with varying degrees of commitment.

When PTJ and I were working on “Paradigmatic Faults in International-Relations Theory” I was fortunate to be able to talk Kuhn and Lakatos with Michael Gordin of Princeton University. When I was at Harvard there were some people who were scary brilliant. Michael was one of those guys. He was also one of my debate partners.

Michael’s new book, The Pseudoscience Wars: Immanuel Velikovsky and the Birth of the Modern Fringe (University of Chicago, 2012) has been getting a lot of positive buzz.