A Terrific Piece on “The MOOC Moment”

Via a Facebook friend, an analysis of the sound and fury surrounding MOOCs by Aaron Bady:

Where this urgency comes from, however, might be less important than what it does to our sense of temporality, how experience and talk about the way we we are, right now, in “the MOOC moment.” In the MOOC moment, it seems to me, it’s already too late, always already too late. The world not only will change, but it has changed. In this sense, it’s isn’t simply that “MOOCs are the future,” or online education ischanging how we teach,” in the present tense. Those kinds of platitudes are chokingly [sic] omnipresent, but the interesting thing is the fact that the future is already now, that it has already changed how we teach. If you don’t get on the MOOC bandwagon, yesterday, you’ll have already been left behind. The world has already changed. To stop and question that fact is to be already belated, behind the times.

There’s a striking similarity between this kind of rhetoric and early globalization discourse. Indeed, one of the best ways to force change is to argue that the transformation is already happening.

I very much recommend reading the whole piece and not simply the excerpts I’ve culled from it. Bady does a much better — and more systematic — job than I did of linking together what Kohen calls “edutainment,” TED talks, and MOOCs. But among the many gems in the essay is this critical insight about MOOC discourse: END_OF_DOCUMENT_TOKEN_TO_BE_REPLACED

Ari Kohen on the value of “edutainment“:

Finally, and most importantly, is the central claim that the test of education is whether or not it’s entertaining. Wales asks, “why wouldn’t you have the most entertaining professor, the one with the proven track record of getting knowledge into people’s heads?” Is there evidence that the most entertaining lecture is the one that gets “knowledge into people’s heads”? Again, I’m not suggesting that a boring lecture is going to do the trick, but I’m arguing that entertaining students doesn’t necessarily equate with teaching them something. When I lecture on Kant, I don’t think I’m really entertaining my students. In my opinion, Kant’s Grounding for the Metaphysics of Morals doesn’t lend itself to entertainment; it’s a dense text that needs some serious explication. Now, I don’t speak in a monotone and I try to find relevant examples to help them make sense of the material, but I’m not standing in front of the class hoping that they’ll all have a great time; I’m standing there with the express purpose of teaching them about Kant.

END_OF_DOCUMENT_TOKEN_TO_BE_REPLACED

About a month ago I wrote that:

The recent obsession with MOOCs has its roots in three interlocking trends: the application of business-school speak to higher education, technology fetishism, and the quest to push down labor costs. It wouldn’t be too much of an exaggeration to say that these are three faces of late-modern capitalism: the colonization of all modes of life by scripts associated with capitalist exchange relations, the “virtuous cycle” of rent-seeking by advocates of “creative destruction,” and relentless pressure to enhance profit by increasing capital-labor ratios.

I’ve been intending to expand on these claims. But now David Brockington has basically written a better version of that nascent post, so I’m going to outsource to him.

As many expat American professors working in Britain tell me, the UK looks an awful lot like the extrapolation of current trends in US academia. And that future isn’t pretty. END_OF_DOCUMENT_TOKEN_TO_BE_REPLACED

Okay, I don’t have one. But I’d like to call attention to some excellent discussion of Massively Open Online Courses (MOOCs). Adam Kotsko asks “what is the business model for online education.” Nigel Thrift analyzes the recent “media obsession” with MOOCs. Louis Betty makes unfortunate swipes at Apple in pursuit of a larger point about techno-faddishism, pedagogy, and higher education. Betty’s piece recalls a great satirical post that Paul Musgrave wrote some time ago at the Duck. And Thoreau reminds us that the real problem in higher education is the debt bubble.

You should go read all of them, but I have a few takeaways that I think worth emphasizing.

END_OF_DOCUMENT_TOKEN_TO_BE_REPLACED

I should probably be wary of taunting the coming moopocalypse, but, as everyone knows, I laugh in the face of obsolescence. So, without further explanation, here are my top ten reasons for MOOCs:

10. The “sage on a stage” isn’t just dead… she’s undead and in high-definition.
9. Web 1.0 monetized those eyeballs like nobody’s business.
8. When your acronym is homophonous with “mook” what could possibly go wrong?
7. MMOCs would probably be too much fun to count as college-level education.
6. MIT and Harvard won’t rest until they’ve achieved total world domination… and only Stanford can stand in their way!
5. The tree of education needs to be refreshed from time to time with the blood of a few college presidents.
4. Too many parents live with the curse of empty basements.
3. University administrators are running dangerously short of buzzwords.
2. It wouldn’t be higher education without something to have an existential crisis over.

And, for all my colleagues and students out there:

END_OF_DOCUMENT_TOKEN_TO_BE_REPLACED 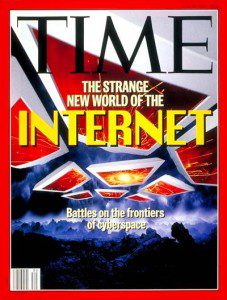 As one of the two great still-extant medieval institutions, the church confronts the digital age with a mixture of trepidation and hope. Hope, because congregations and ministers with online presence can build up new types of community and remain in contact through a variety of media; trepidation, because the church, like any incumbent industry, looks with fear at the fate of travel agents, small retailers, and print newspapers. Having seen each industry fall to the likes of Expedia, Amazon, and the Huffington Post, the leaders of churches throughout the United States and beyond worry that some new digital entrant could eat their lunch.

Ministers, priests, and lay leaders are thus turning to Massively Open Online Churches. MOOCs offer senior church executives a way to position their institution to survive in the twenty-first century. Churches with established brand names have already begun to offer tentative first steps. In a wise move, many ministers of large and famous congregations have put the most important part of the church experience, the sermon, online. Online sermons, of course, are not bound by brick-and-mortar constraints; hundreds of thousands of people frequently listen to at least the first five or ten minutes of notable sermons, with as many as two percent of virtual congregants completing the sermons.

Some have wondered whether online sermons are a credible substitute for traditional, physical church attendance. Measuring church outcomes by sermon completion—the easiest metric to compile, and hence the industry standard—it seems obvious that virtual religious offerings need to be adjusted to better meet the needs of the medium. Physical congregants, after all, practically always listen to the entire sermon. Accordingly, a handful of churches have begun to bestow online badges on their virtual congregants who can show that they have completed listening to sermons. Some believe it is enough to take congregants’ words on faith, as it were; others insist that there be short quizzes to guarantee that congregants have heard and understood the sermon.

The rewards of such virtual congregations are easy to calculate for senior church leaders and religious foundations, the most important decision-makers in the religious marketplace.