A story in the New York Times this morning suggests that the National Security Agency has been analyzing our social networks through email and phone call records, apparently accomplishing “large-scale graph analysis on very large sets of communications metadata” of American citizens and foreign citizens alike.  This network analysis uses not only contact data but GPS tracking to understand not only how we relate but how we move in relationship to each other.

From the description in the article, the methods that the NSA uses seem to be very similar to those that political science is using, in Michael Ward, Katherine Stovel, and Audrey Sacks’ words, to locate the “holy grail” of  “effectively analyzing the interdependence and flows of influence among individuals, groups, and institutions,” a sea-change in the field.

I’m not arguing that we as political scientists have culpability in this (these methods did not originate in our field by any stretch of the imagination). But I am interested – if network analysis does the cool things it does for our work, what does it do for the work of those whose job is to watch and monitor us?

END_OF_DOCUMENT_TOKEN_TO_BE_REPLACED

Part of the research project that is keeping me too busy to blog involves capturing, coding and visualizing the issue agenda for various transnational networks. Here is a visualization of the core human rights network on the World Wide Web, circa 2008.* (Nodes represent organizational websites and ties represent hyperlinks between them. Node size corresponds to in-degree centrality within the network.)You can click for a larger view. 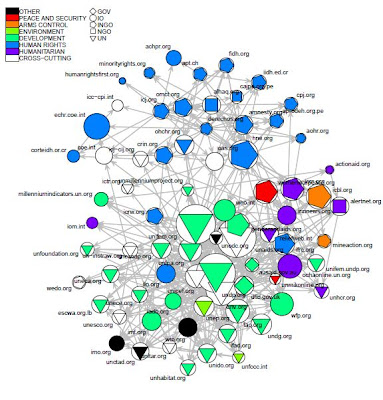 It looks to me as if there are really two networks here: a human rights network and a development network, all tied together conceptually under the rubric of human rights. Whether this means that the human rights movement has been colonized by the development community or vice-versa is hard to say from this. 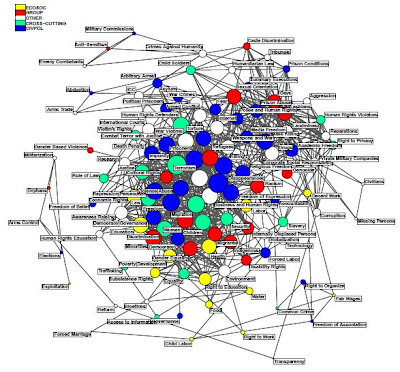 One might think, given the predominance of development organizations in the human rights network, that economic and social rights would be front and center on the overall network’s issue agenda. But no:

1) Economic and social rights (e.g. “Water” or “Health Care”) are somewhat marginalized relative to civil and political rights issues like “Repression” or “Elections” (11.5% and 26% respectively). Economic and Civil-Political rights tend to cluster with one another, suggesting a division of labor among human rights organizations.

2) A number of new rights have been articulated that effectively cut across these archetypal categories and seem to serve as bridges between the older EcoSoc/CivPol typology. 15% of the total consists of cross-cutting isuses like “Discrimination,” “Access to Information” or “Impunity.”

4) However what’s most interesting to me is the proliferation of “rights” that fit none of these categories (the white nodes). 31% of the issues on the agenda fall into the “Other” category, which is composed of roughly four types of issues: those relating to humanitarian law (“Civilians,” “Crimes Against Humanity,” “Humanitarian Intervention”) or to war more broadly (landmines, occupation, militarization); those relating to technology (“Internet,” “Bioethics”) and those referring not to human rights problems but rather to the processes activists use (“Awareness-Raising,” “Research,” “Human Rights Education”) plus a miscellaneous category that includes things like “Drugs” and the “Environment.” The biggest proportion of the “other” category, however, has to do with war and war crimes, confirming a significant blending of human rights and humanitarian law.

*We identified 41 prominent human rights organizations, as operationalized using a co-link analysis tool called IssueCrawler, with the Amnesty directory, the Choike Human Rights Directory and the UDHR60 NGO links page as starting points.
**We captured mission statements and “what we do” lists from each organization and coded them at QDAP.

What I Learned At Nerd Camp

I spent last week at an ICPSR workshop on network analysis methods in Bloomington, Indiana, and while I wouldn’t say I’m exactly an expert now on network analysis, I did learn to do a few interesting things with my human security data.

For example, below is a visual representation of the “human security issue agenda” as represented by 88 websites of organizations in the “human security network” circa May 2008. I identified the organizations in that network through a hyperlink analysis using the tool Issuecrawler, and then we downloaded their mission-statements and “issue lists” and tagged each document with as many different “issues” as we could find in the text data. When two issues occur in the same document, I consider that a “tie” between two “issues.” So on the map, links between issues represent co-occurences in the text. 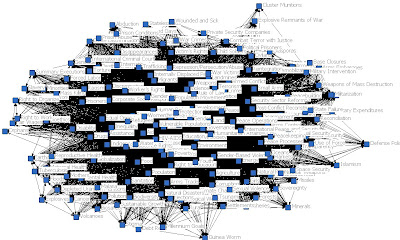 As you can see, lots of organizations do lots of issues, so when you first look at the graph the ties are so many it’s just a big mess. But if you drop out half the ties, you end up only with the most densely connected issues, and then it starts to look pretty interesting: 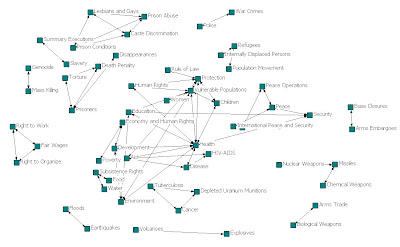 What’s interesting is that the issues cluster based on how often they co-occur a lot: some issues cluster together more than others. You notice that the human security network is really made of a few separate issue clusters – a cluster around peace or conflict-prevention and resolution; one around conflict mitigation or humanitarian affairs; one around repressive or violent practices (what human security specialists like to call the “freedom from fear” agenda) and another dealing more with economic and social rights, which is adjacent to a cluster dealing with development and poverty reduction, and another dealing with environmental security and health, both of which connect to weapons issues which connect to the security sector / arms controls organizations, which connect again to the “peace and security”/conflict prevention folks.

Lots of people have written abstractly about what “human security” means, but as far as I know this mine is the first analysis that actually maps the term empirically. If you add in a few more of the links (using a “cut-point” of .40 instead of .50 for example) you can see these clusters emerge in somewhat sharper relief, but also see them beginning to connect together. 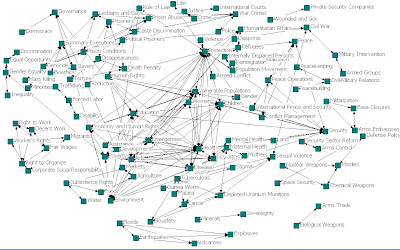 You’ll notice that these clusters are linked to each other to a greater or lesser extent. For example, there are a lot of connections between “human rights” and “humanitarian affairs” and relatively fewer connections between the “arms control” cluster and the “economic and social rights” cluster. There’s also a distinction between issues associated with “arms control” and those associated with “disarmament” – because everyone knows the arms control folks are manly realists and the disarmament folks are peace-loving hippie feminists.

Finally, there are some interesting cases where an issue doesn’t show up where you might imagine it would in the network. “Depleted uranium weapons,” for example, is mentioned in connection with health and the environment (and is most closely associated with “disease” issues like cancer) but is not on the agenda of organizations concerned with limiting the use of weapons in warfare (like landmines and chemical weapons). “Sovereignty,” interestingly, is most often mentioned not as a counterpoint to military intervention in humanitarian crises (as the literature would suggest) but in regards to natural resource disputes (or, shown here, “minerals”).

What does it all mean? For my project, I’m interested in what gets on the agenda and what doesn’t, and so how agenda space is carved up within a network is a really interesting piece of that question.