What We’re All Missing in the “Zero Dark Thirty” Debate

This is a guest post by Peter S. Henne. Peter is a doctoral candidate at Georgetown University. He formerly worked as a national security consultant. His research focuses on terrorism and religious conflict; he has also written on the role of faith in US foreign policy. During 2012-2013 he is a fellow at the Miller Center at the University of Virginia.

I appreciated Jeffrey Stacey’s recent post on the debate over “Zero Dark Thirty.” It’s useful to point out what is being obscured by the criticism of the movie’s depiction of torture. But I think his piece missed a broader aspect of the movie, as well as director Katherine Bigelow’s other war, “The Hurt Locker” (which focuses on an Explosive Ordnance Disposal (EOD) team in Iraq): what it reveals about the civilian-military divide in the United States.

Many critics have praised Bigelow’s work for its artistic value, and its significance for understanding the post-9/11 era. Much of this has to do with her filmmaking skills. But a good amount of praise focused on her ability to faithfully tell the story of contemporary military activities. In The Washington Post, Ann Hornaday exclaims that Bigelow demonstrates early in the film that “she will not turn away from the most unsavory aspects of the history she’s chronicling.” The New York Times’ Manohla Dargis discusses the movie as “a seamless weave of truth and drama.” Similarly, many praised “The Hurt Locker” for its “authenticity.”

At the same time, many critiques of these movies focus on their lack of authenticity. By now, we are all familiar with the attacks on “Zero Dark Thirty” for misrepresenting the role torture played in the hunt for bin Ladin. But similar attacks arose after “The Hurt Locker” came out. The film was full of inaccuracies in its depiction of EOD teams, resulting in the head of the Iraq and Afghanistan Veterans of America calling it “disrespectful.”

Now, I realize the obvious response is: “it’s a movie.” That’s correct, but if the biggest selling point of a movie—or two—is their faithfulness to reality, and they get that wrong, then we’re all missing something, right? No one worries about inaccuracies in “Apocalypse Now” because of, well, Marlon Brando. But we should worry about inaccuracies in Bigelow’s war movies.

END_OF_DOCUMENT_TOKEN_TO_BE_REPLACED 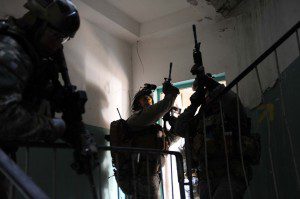