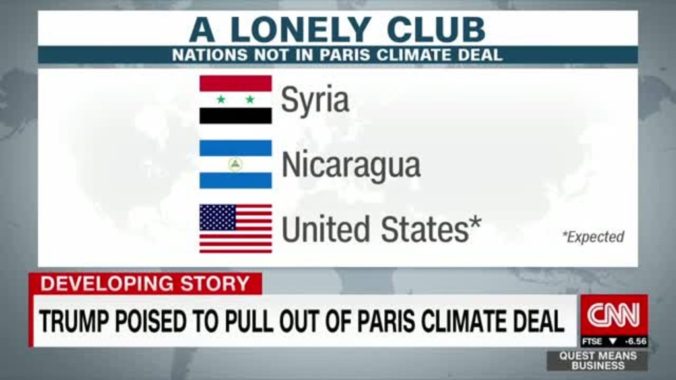 We all know the traditional narrative in International Relations of the state as a unitary act. Despite substantial volumes of work in the foreign policy analysis subdiscipline as well as in IR theory, the common shorthand in IR scholarship is to say ‘China’ did X or ‘Britain’ bombed Y. At least in the case of the United States, climate change is going to force scholars and analysts to seriously reconsider those assumptions. END_OF_DOCUMENT_TOKEN_TO_BE_REPLACED

This World Politics in a Time of Populist Nationalism (WPTPN) guest post is written by Robert Y. Shum, an Assistant Professor of Political Science and International Studies at The College at Brockport, State University of New York (SUNY).

Does the Paris Agreement, and the likely withdrawal therefrom by the Trump administration, matter? On the surface, the current situation is not so different from George W. Bush’s withdrawal from the Kyoto Protocol. Probing deeper, however, important differences come to the fore. Many independent observers saw the Kyoto Protocol as fundamentally flawed in its lack of obligations applying to developing countries, including China and India. In contrast, an understanding between China and the United States lay at the center of the Paris Agreement.

Critics of the Paris approach to internationally-negotiated national emissions targets nonetheless argue that its effectiveness is limited compared to that of policies made at and by domestic institutions, regardless of the Parisian promise to broaden participation at the international level so as to include developing-country emitters. With the prospect that US participation in the international climate regime will be reduced under a Trump administration, the question regarding the value of participation in international agreements now shifts to the effect of US (non-)participation on the global climate regime. Minimizing this effect has become a source of hope and optimism. Thus, ironically, following Trump’s election, the critical view of Paris takes on a new function as both consolation for environmentalists and apologia for skeptics.