Does pastoralism — the livelihood of semi-nomadic animal herders like the Maasai — have a future in East Africa? In my concluding post on the famine in the Horn of Africa, it seems like a fair question to ask, no more controversial than whether Somalia should be divided into several countries (see here, here, here, and here for previous posts).

I ask this because much of the commentary on the current crisis in the Horn of Africa suggests that “development” is the long-term solution for the region to ward off the potential for recurrent crisis. However, according to FEWS NET, parts of Ethiopia affected by the drought have lost 60 to 80% of their cattle, 25 to 30% of their sheep and goats, and 25 to 40% of the camels. I can only imagine that the situation is more dire in Somalia. Indeed, the region has been buffeted by droughts over the last 10 years, which has likely compounded the effects of this year’s drought.

Before I engage the question at hand, the development challenge that people have identified essentially encompasses a suite of initiatives that would buffer communities from the adverse effects of future weather shocks. In short, development in these arid drylands of East Africa would largely build resilience. Weather shocks would have less severe consequences, and communities would bounce back faster.

Allan Jury from the World Food Programme in a recent Brookings forum suggested that the current crisis provides a window in to the differential preparedness and capacity of countries in the region. While Kenya is in a significantly better position than Somalia, Ethiopia and Uganda have done more to support local community resilience than Kenya:

I think one point, I think — we are talking Somalia. But I do think it’s important to say that, in Ethiopia, and to a lesser extent, in Kenya and certainly Uganda where there have been programs of the type, many programs of the type that Oxfam was talking about — long-term resiliency-building programs designed to build community resiliency — the overall levels of affected people are far less than one would’ve expected with a similar level of drought.

He suggested that political instability in Kenya impeded its preparedness:

And I think a close look, particularly at Ethiopia, where perhaps more of that work in resiliency has been done, Kenya had some good successes — but frankly, their political problems over the last five or six years have made that more difficult to sustain — I think shows it isn’t business as usual.

What kinds of preparations have been most useful? The Economist profiled a number of initiatives:

For the past few years the Ethiopian government, the WFP and others have been running hunger-relief programmes which give out not only food aid but seeds and help to turn wasteland into productive acres. The result, says Josette Sheeran, the WFP’s boss, is that “we have one-third the number of people suffering from the emergency than we might have done [in Ethiopia].” Kenya has kept its school-meal programme running in the drought-stricken areas, so families know their children will get at least a meal a day. In 1984-85 famine ravaged the Karamoja region of eastern Uganda, which shares the same dryland climate as Somalia and Ethiopia. It might well fall into famine again this year. But Karamoja has had a lot of “food aid-plus” projects and so far is not on the WFP’s list of places in emergency need.

While Ethiopia has been giving relatively high marks for its performance, a BBC Newsnight report released two weeks ago suggested that the government is withholding aid from farmers in the Ogaden region in southern Ethiopia for failure to support the ruling government. The government denied the allegations, labeled the report as “unbalanced.”

At least two people I talked to who have recently been in Ethiopia suggest that the drought is not getting that much national attention there. In light of the BBC story, donors are likely going to have to take a closer look at Ethiopia’s practices and exercise more oversight over how the more than $3 billion in foreign assistance the country receives annually is spent.

That said, no small part of that $3 billion has helped Ethiopia with its social safety net that has provided support for about 7 million people. The program has included cash transfers to poor people in exchange for work, some cash transfers for families without labor, drought risk financing, and a number of measures to improve agriculture (see here and here). Observers credit this program for preventing the situation in Ethiopia from becoming anything like Somalia.

What is the Future of Pastoralism?

While programs like the social safety net in Ethiopia sound very promising, I wonder how well development programs intended to help pastoral communities retain their way of life are working. I’m not sure what the basis of livelihoods is of all the 11 plus million people suffering in the current crisis, but a sizable proportion of them if not a majority are pastoralists.
I have distinct but perhaps ill-informed worries that this is not a lifestyle that meshes well with the modern age of sovereign borders, population increase, and more sedentary farming. Their lifestyle, based on seasonal movement to watering holes and grazing lands and periodic cattle raiding, is increasingly problematic, particularly as a lot of these communities are well-armed. They fight with each other over cattle and clash with farmers over grazing and water rights. Even if border regions between countries are porous, pastoralist movements between countries may be more constrained than they were in the past.

In our research trip to Kenya in November 2010, most of the organizations we spoke with — the World Food Programme, FAO, the Red Cross, FEWS NET, UNHCR, and the International Organization for Migration — were all incredibly involved in food security programs in the agro-pastoralist areas of the region, Uganda (Karamoja), southern Sudan, Northern and Eastern Kenya (particularly Turkana), southern Ethiopia (Ogaden), and southern Somalia.

The map below of the emergency response in Kenya to the drought mirrors the organizations we talked to. 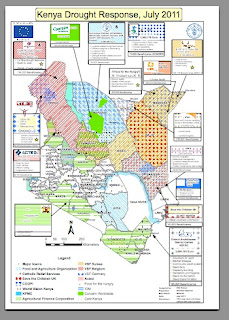 Many of these areas are less densely populated, marginal areas whose people are largely excluded from political power. But the problems go deeper than their lack of political access. As Mukhisa Kituyi, director of Kenya’s Institute of Governance, points out:

Predictably, the tired cliché that government is deliberately marginalising pastoralists is finding political amplification from the talking classes….But finger-pointing at government failure and celebrating perches of irrigated fields and urban concentrations as solutions, may over-simplify the monumental prolems of our rangelands.

Kituyi suggested that historically the cycle of abundance and drought led to the deaths of the most vulnerable animals and people but:

Over recent decades, we have fashioned a system where extreme droughts lead to famine relief centres where people who would otherwise have died receive food and housing. We have no way of giving them a new livelihood as their animals are wiped out by drought and theft. After the drought, they have no stock to return to pastoralism. They live on the margins of a pastoral economy but are sustained by food aid.

The only long-term solutions from his perspective are skills for the younger generation and “totally new livelihoods for those sloughed off the traditional economy.”
Kituyi seems to suggest that with food aid it is now possible for more people to live in these areas than the carrying capacity of the region would otherwise permit. For example, Turkana district in northern Kenya, site of one of the country’s main relief nearly doubled in population from the 1999 census to 2009 census, from 450,860 people to 855,399. Of course, population growth alone does not suggest a region had grown beyond its ability to support itself. Increased agricultural yields within the district and the ability to buy food from surrounding areas could sustain Turkana’s population, but the district, with 94.3% poverty, is Kenya’s poorest.

Stephen Sandford, a prominent scholar on pastoralism, echoed these concerns in 2006 (!) advancing the thesis that there are “Too many people too few livestock.” Steve McDowell of the Red Cross described the problem in terms of population growth of animals and humans with insufficient technical innovation to sustain them both:

In Sandford’s view, the problem goes beyond investing in alternative livelihoods:

Most development organisations have accepted the current conventional wisdom that sound pastoral development requires policies and programs that protect pastoralists’ property rights, facilitate herd mobility, provide services (e.g. animal health) in a way that is designed to fit pastoral conditions, and place decision-making powers and control in the hands of pastoralists and their institutions. I strongly agree that those policies are needed. But they are no longer enough.

NGOs, donors and governments need to accept that what is afflicting pastoral GHA is not just a series of weather-induced independent crises requiring occasional emergency relief but a continuing structural (fundamental-imbalance) problem.

Other observers believe the problems have less to do with pastoralism than with how pastoralists have been marginalized and their traditional practices usurped by governments and more influential societal groups. Simon Levine of the UK-based Overseas Development Institute (ODI) sees pastoralism as an efficient and ecologically appropriate lifestyle in the Horn. He places the blame on government policy that limits their mobility and encourages farming in areas traditionally reserved for grazing:

Famines don’t occur in pastoral areas when rains fail unless they have other problems. Crises occur when pastoralists’ migration patterns are disrupted and they can’t access reserve pastures and water sources. This is happening when governments refuse to allow pastoralists to move over the extensive areas they need to cover to cope with failed rains or because of conflict. This is the problem now: conflict in Somalia is also preventing pastoralists from Kenya and Ethiopia from going to their drought reserve area, and conflict in the Ogaden region of Ethiopia is preventing pastoralists from accessing their good grazing lands (in the hawd).

Helen de Jode, who has written on livestock production in Africa’s drylands for the London-based International Institute for Environment and Development (IIED), makes a similar argument. She suggested in a recent Guardian opinion piece that the rhythms of pastoralism have been disrupted by the modern world, making it harder for pastoralists to cope in times of drought:

But in recent decades vast areas of the pastoralist land in the Horn of Africa have been taken over by agriculture and large-scale commercial farms – often in the key strategic riverine areas previously reserved for times of drought. This has undermined the whole system and reduced yields of milk and meat.

The question I have is whether or not pastoralism as a way of life can be reconciled with these forces of modernity. I don’t have an obvious answer to this question, but it’s hard to see a pathway for pastoralists to be on the winning side of history here.

For a more extensive debate on the future of pastoralism, see this exchange here from Future Agricultures Consortium (FAC) and the research produced by this March 2011 conference hosted by FAC and the Feinstein International Center from Tufts University.