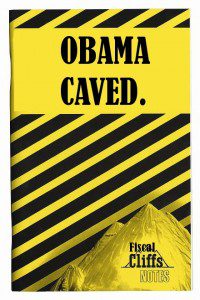 Judging by the rumors coming out of the media, it appears that we have a deal to avert the fiscal cliff. This is troubling on a number of levels. First, the deal will be agreed to by the outgoing Congress–what we at the Duck are ashamed to call the lame-duck session–instead of the Congress just elected, the one that includes Elizabeth Warren instead of Scott Brown and Claire McCaskill instead of Todd Akin. Second, and related, on its merits this appears to be a deal that serious fiscal hawks and progressives alike will be deeply dissatisfied with–one that locks in Bush tax cuts for nearly all Americans, despite the U.S. government’s pressing need for revenue, while failing to make any substantial headway on America’s long-term fiscal problems. Most important, of course, this deal is simply not one that most Americans want; it is, instead, a deal acceptable to the House Republican caucus (or, rather, one presumptively acceptable to that caucus, which has a notable tendency to shoot itself in the foot).

The outcome of the negotiations, and the very fact that there were negotiations to begin with, suggest that it’s time for restructuring the American government.