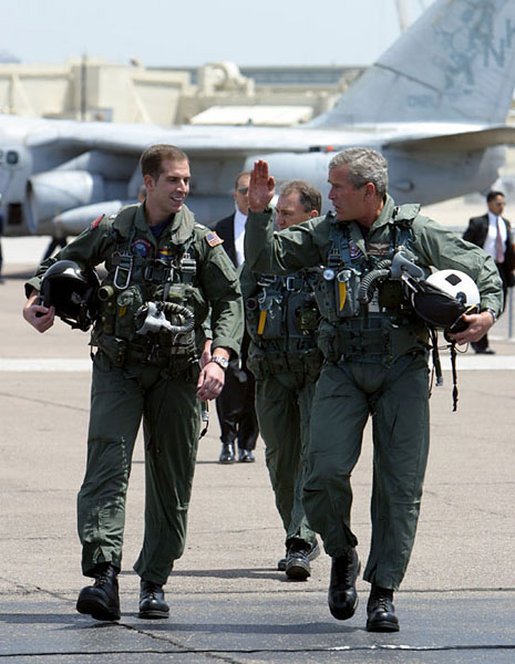 Yesterday, a student asked me about the recent news reports indicating that Iraq did, in fact, have “weapons of mass destruction” back in 2002 and 2003 when the U.S. was attempting to justify a “preemptive” war. The New York Times reported that American soldiers were injured in the past decade by chemically-armed munitions found in Iraq.

Already, a slew of articles in the media have debunked the claim that this vindicates George W. Bush and his Iraq misadventure. This Washington Post piece is perhaps the best since it primarily quotes Bush administration claims from the pre-war period.

The Times piece certainly does not try to claim that Bush is vindicated:

END_OF_DOCUMENT_TOKEN_TO_BE_REPLACED

I do not own a copy of the George W. Bush memoirs, but I have been following the bits and pieces that appear in my newspaper. I’m going to try to blog about a few of the most important items, especially as they pertain to my past blogging and/or research interests.

For example, the former President confirms that Israel destroyed a Syrian nuclear reactor in September 2002. This has long been a matter of discussion on the Duck.

Even more interesting, Bush says he rejected Israel’s request that the US bomb the facility. Given Bush’s “preemptive” war policy, Israel may have viewed this as a perfectly reasonable favor. Apparently, however, the CIA “had only ‘low confidence’ that Syria had a nuclear weapons program,” though they had “high confidence” that Syria had built the reactor — thanks to North Korea.

What this means is that the Bush Doctrine did have limits after all!

Then again, perhaps it is more accurate to say that Israel simply implemented US policy:

“Prime Minister Olmert’s execution of the strike made up for the confidence I had lost in the Israelis during the Lebanon war,” Bush writes. “The bombing demonstrated Israel’s willingness to act alone. Prime Minister Olmert hadn’t asked for a green light, and I hadn’t given one. He had done what was necessary to protect Israel.”

Search the current White House website for the phrase “Bush Doctrine” and “no results” are returned. However, as I’ve previously argued, that does not mean the Obama administration has abandoned the Bush view of “preemption” (which was really a rebranding of preventive war).

This week, the Pentagon has announced a new cyber-spin on “preemptive war”:

The Pentagon is contemplating an aggressive approach to defending its computer systems that includes pre-emptive actions such as knocking out parts of an adversary’s computer network overseas – but it is still wrestling with how to pursue the strategy legally.

General Keith Alexander, who leads the Pentagon’s new Cyber Command is quoted as saying “We have to have offensive capabilities, to, in real time, shut down somebody trying to attack us.” These attacks are more than just hypothetical, as detailed in the September/October 2010 issue of Foreign Affairs.

The Post article mentions clearly legal defensive measures the Pentagon could employ when it anticipates attacks — firewalls, password protection, etc. Plus, the U.S. could try to resolve potential disputes without force, with diplomacy perhaps. And, of course, General Alexander implies a retaliatory attack, which would presumably be legal.

But the notion of striking first seems to have been engrained in the defense community’s culture over this past decade.

Luckily, at least some bureaucrats within the administration still recall the illegality of preventive attacks:

Government lawyers and some officials question whether the Pentagon could take such action without violating international law or other countries’ sovereignty.

Apparently, the U.S. has already engaged in questionable cyber-preemptive attack:

The military’s dismantling in 2008 of a Saudi Web site that U.S. officials suspected of facilitating suicide bombers in Iraq also inadvertently disrupted more than 300 servers in Saudi Arabia, Germany and Texas, for example, and the Obama administration put a moratorium on such network warfare actions until clear rules could be established.

The CIA, by the way, is apparently upset that the Pentagon’s strikes would bound to be covert — and that domain belongs to CIA. Turf war!

Yesterday, US troops crossed the Pakistan border for the first time — clearly extending the war in Afghanistan into another state. This is from The Washington Post story:

Helicopters carried U.S. and Afghan commandos many miles into Pakistan on Wednesday to stage the first U.S. ground attack against a Taliban target inside the country, Pakistani officials said. At least 20 local people died in the raid, according to the officials.

Pakistan filed a protest and the US military apparently had no comment.

Mohammed Sadiq, a spokesman for Pakistan’s Foreign Ministry, condemned a “gross violation of Pakistan’s territory” and “a grave provocation.” In a written statement, he said his office lodged a formal complaint with the U.S. Embassy in Islamabad.

“Such actions are counterproductive and certainly do not help our joint efforts to fight terrorism,” Sadiq said. “On the contrary, they undermine the very basis of cooperation and may fuel the fire of hatred and violence that we are trying to extinguish.”

I do not really fault Pakistan for this response. Escalation can be dangerous.

Pakistan representatives say this was not a case of “hot pursuit” and that there is no bilateral agreement allowing such attacks in any case.

This is not the first time that the US has extended the “war on terror” into Pakistan — just the first use of ground forces.

In January 2006, the US launched a missile attack on a small village in Pakistan, reportedly because al Qaeda’s number two man was visiting. He was not hit and Pakistan considered the strike an act of war. I previously argued that the attack was too provocative and unjustified given the information at hand.

Last summer, on the heels of a terror NIE finding that al Qaeda had established a “safe haven” in the Federally Administered Tribal Areas (FATA) of Pakistan, US Homeland Security Director Fran Townsend warned that Pakistan could be attacked under the Bush Doctrine of preemption.

Is the US at war with Pakistan?

Incidentally, John McCain has previously said he would not strike Pakistan — even as other prominent Republicans criticized Barack Obama for threatening Pakistan in various ways.

Anthony Clark Arend at Georgetown University is blogging about Israel’s threat to bomb Iranian nuclear reactors if they do not desist. He worries that this latest brinkmanship is more evidence of a decline in the non-aggression norm, since the situation would not meet the criteria for preemptive self-defense against an imminent attack laid out in the UN Charter as an exception to the non-aggression rule:

In other words, we’ll be back to plain old balance of power politics, a bad recipe in a nuclear armed world.

Arend’s discussion of the law on preemptive self-defense, and how it differs from the Bush doctrine, is extremely illuminating. I think he may be overestimating the damage being done to the norm itself here, however (much like those arguments I’ve heard that Guantanamo Bay “threatens the entire Geneva regime.”) I would say that in terms of norm decline, what matters is not what states like Israel or the US do, but how the international community reacts, since as Fredrich Kratockwil and John Ruggie long ago argued, “norms are counterfactually valid.”

Scholar Larry Diamond resides at Stanford’s conservative Hoover Institution, but he worked for the Bush administration in Iraq just a couple of years ago. He thinks that a war with Iran might be in the cards:

President Bush’s neoconservative advisors and pundit supporters have been beating the drums of war with Iran since 2003, when the president declared Iran to be part of an “axis of evil.” Recall that a senior administration official told The Times that Iran should “take a number” in the wake of the invasion of Iraq. In his recent address to the nation on the troop surge in Iraq, Bush issued more threats to Iran. Now the president has named a Navy admiral to head the U.S. Central Command and dispatched a second aircraft carrier and minesweepers to the Persian Gulf, presumably to prevent Iran from closing the Strait of Hormuz in the event of conflict.

These developments and other administration moves could presage an air attack on Iran’s nuclear facilities.

Here at the Duck and on my own blog, I’ve been blogging about the drumbeat for war for awhile now.

Skeptics should keep Diamond’s warning in mind, since “recklessness, not prudence, has been the hallmark of this administration’s foreign policy.” Condi Rice’s former colleague wants Congress to hold hearings and prevent war against Iran NOW — unless there’s “an imminent attack or a verified terrorist attack on the United States by Iran.”

If the United States continues to be bogged down in a protracted bloody involvement in Iraq, the final destination on this downhill track is likely to be a head-on conflict with Iran and with much of the world of Islam at large. A plausible scenario for a military collision with Iran involves Iraqi failure to meet the benchmarks; followed by accusations of Iranian responsibility for the failure; then by some provocation in Iraq or a terrorist act in the U.S. blamed on Iran; culminating in a “defensive” U.S. military action against Iran that plunges a lonely America into a spreading and deepening quagmire eventually ranging across Iraq, Iran, Afghanistan, and Pakistan.

A mythical historical narrative to justify the case for such a protracted and potentially expanding war is already being articulated. Initially justified by false claims about WMD’s in Iraq, the war is now being redefined as the “decisive ideological struggle” of our time, reminiscent of the earlier collisions with Nazism and Stalinism. In that context, Islamist extremism and al Qaeda are presented as the equivalents of the threat posed by Nazi Germany and then Soviet Russia, and 9/11 as the equivalent of the Pearl Harbor attack which precipitated America’s involvement in World War II.

As Dr. Brzezinski noted, the threat comparison is absurd since Germany and the Soviet Union were powerful states with great resources, while few Muslims follow the “isolated fundamentalist Islamist aberration” that is al Qaeda.

On the bright side, there’s at least some evidence that the Bush administration might be backing off on some of its claims about Iran.