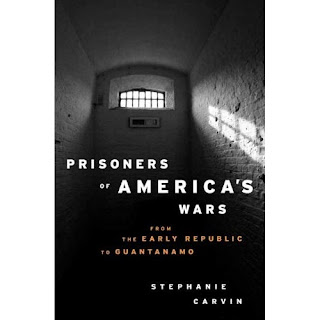 My (first) book, Prisoners of America’s Wars: From the Early Republic to Guantanamo is now shipping on Amazon.com (or Amazon.co.uk, Amazon.ca, etc.). Considering that this would be the closest thing to offspring that I have ever produced, I thought that I would post it in the hope that it may be of some interest to some Duck readers. I’ve pasted the abstract below for that very reason:

Prisoners of war have been a significant feature of virtually every conflict that the United States has engaged in since its revolutionary beginnings. Today visitors to Washington DC will frequently see a black POW flag flying high on government buildings or war memorials and monuments in silent memory. This act of fealty towards prisoners reflects a history where they have frequently been a rallying point, source of outrage and problem for both military and political leaders. This is as true for the 2003 Iraq War as it was the American Revolution.

Yet, the story of prisoners in American wars (both enemies taken and soldiers captured) helps to reveal much about the nation itself; how it fights conflicts and its attitudes towards laws of war. A nation born out of an exceptional ideology, the United States has frequently found itself faced with the contradictory imperatives to be both exemplary and secure, resulting in situations that were sometimes ironic and sometimes tragic. At the same point American diplomats might be negotiating a treaty at The Hague, American soldiers might be fighting against a bloody insurrection where it seemed that little to no rules applied.

The complex relationship between America, prisoners of war and international law is not one entirely based on exemplary culture or carnage, but on a blend of ideology, historical experience and national imperatives that has challenged presidents from Washington through to Obama. By taking a historical approach, this book demonstrates that the challenges America faced regarding international law and the war on terror were not entirely unique or unprecedented, despite the claims made by the Bush administration or its policies, as claimed by its critics.  Rather, to be properly understood, such dilemmas must be contextualized within the long history of those prisoners captured in American wars.

Stephen King, eat your heart out.