A Different Take on the URI Statement 2.0

Kindred Winecoff disagrees that this was a modest victory:

I must completely disagree with his (“modest”) level of satisfaction. This represents no victory at all because this new statement from URI officials, like the first one, completely misses the point. This is not about First Amendment rights. Nobody was saying that Loomis should be thrown into the deepest darkest dungeon never to be heard from again. They were saying that he should be fired or otherwise professionally damaged for an emotional — and politically motivated — response to a mass killing.

The relevant standard here is academic freedom, not First Amendment rights. The University of Rhode Island subscribes to the 1940 “Statement of Principles on Academic Freedom and Tenure” issued by the American Association of University Professors. This Statement indicates that Loomis deserves the full support of the University of Rhode Island even if he was speaking under the banner of the University. (Which he always is, implicitly, contra the views of the CT commenters.) Instead of espousing that principle, which is fundamental to the mission of public universities, the University has repudiated it by saying that Loomis deserves no greater protection than those who have written to the University on this matter, whether in solidarity with or opposition to Loomis.

END_OF_DOCUMENT_TOKEN_TO_BE_REPLACED

A Modest Victory in the Struggle Against Academic Fecklessness

The URI administration has issued a new statement: 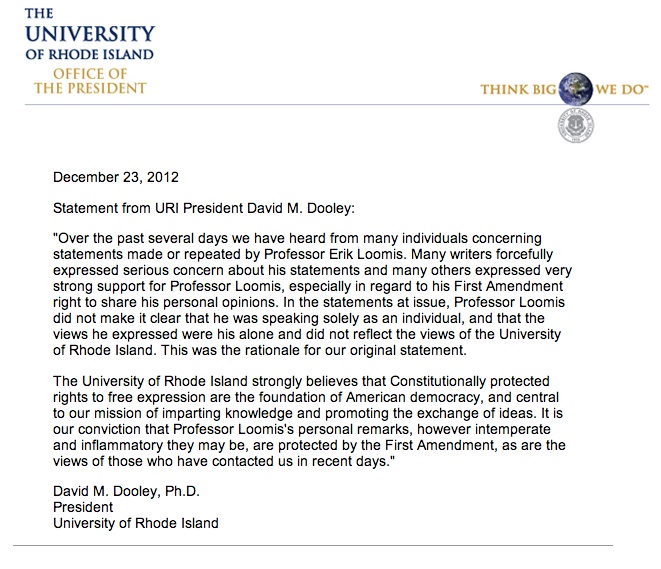 What to make of this?

END_OF_DOCUMENT_TOKEN_TO_BE_REPLACED

As I sorta implied below, you don’t need to agree with Erik’s political views or his manner of expressing them to recognize that the President of the University of Rhode Island’s statement is all kinds of appalling. The good folks at Crooked Timber have put together a petition to that effect. Go sign, if you’d be so kind.

END_OF_DOCUMENT_TOKEN_TO_BE_REPLACED

I wasn’t going to post anything about the cyber-intimidation campaign being directed at Erik Loomis, as that seemed like a job for Big Important Liberal Blogs and not for the Duck of Minerva. But now the issue has strayed directly into our territory.

In brief, Erik Loomis is a history professor at the University of Rhode Island and a long-time blogger. His highest-profile gig is at Lawyers, Guns & Money. In the immediate aftermath of the Newtown massacre, Erik tweeted that he “wanted to see Wayne LaPierre’s head on a stick.” The usual suspects in the conservative blogsphere soon translated this into the idea that Erik had called for LaPierre’s assassination.