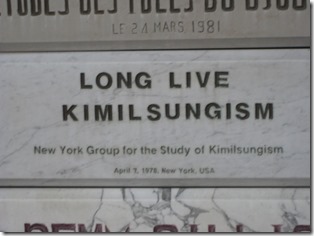 I know what you’re thinking, I’m being a show-off area specialist, Asian language names can be hard for anglophones (and vice versa), and who cares about KIS anyway, because this crisis is about Kim Jong Un? All of that is true of course, especially the first one, but come on…

Richardson isn’t just any old hack like me on North Korea. (Here’s my take on the crisis.) He has been a regular point man for the  US on NK for more than a decade and markets himself as such on the talk-shows. And if you study NK in even the most basic way (here’s a good place to start), you know who KIS is. He’s everywhere. He founded the state in 1948 and ruled it until 1994 as his own personal fiefdom. The whole country is built around his personality cult. The regime even started calling its ideology ‘Kimilsungism,’ giving up the fictions of Marxism, communism, etc. KJU has called NK ‘KIS country’ and explicitly models himself after KIS in his clothing, hairstyle, and girth. Statues of KIS are everywhere, and Richardson has been there apparently eight times. I went there just once, and I’ve got my propaganda down pat about the Great Korean Leader, Comrade KIS’ heroic construction of socialism in our style under the revolutionary guidance of the Korean People’s Army defending the peasant and workers against the bourgeois imperialist Yankee Colony..… (I could keep going like that for a few more sentences if you like).

END_OF_DOCUMENT_TOKEN_TO_BE_REPLACED 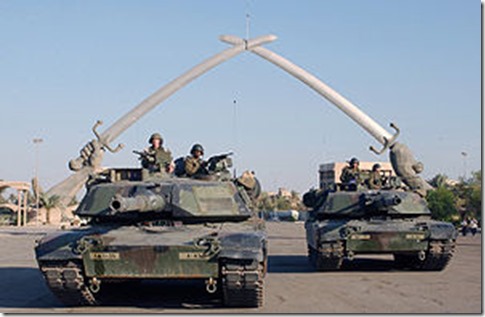 I’ve been thinking a lot about the war this month. I’ll be teaching it in the next few weeks at school because of the decade anniversary (March 20). My quick sense is that any defensible theory behind the war was simply buried by an execution so awful, disorganized, mismanaged, and incompetent that it invalidated the whole premise.

The whole episode became just shameful, and regularly teaching and conferencing with non-Americans these last few years has made this so painfully clear. My students particularly are just bewildered to the point of incredulity. Again and again, the basic thought behind the questions is, ‘what the hell happened to you people? 9/11 made you lose your minds there?’ *sigh* (NB: when Asians ask me about guns in the US, the ‘what the hell is wrong with you people?’ bafflement is the same.)

Hence, the post title purposefully implies that the invasion was a bad idea. But to be fair, that should be the first question: what, if any, arguments at this point can be mustered to defend the war? IR should try to answer this seriously, because I’m all but positive that the journalistic debate will be not be driven by the state of Iraq or US foreign policy today, but by the high personal reputational costs faced by so many pundits supportive of the war. It would not surprise me at all if folks like the Kagans, Krauthammer, or Thomas Friedman miraculously found that the war was worth it after all. McNamara-style mea culpas only happen at the end of a career (so I give Sullivan and Fukuyama credit for theirs on Iraq). But IR should be more honest than that.

END_OF_DOCUMENT_TOKEN_TO_BE_REPLACED

So it’s election time, which means CNN, etc. will be filled with pundits with only the vaguest credentials – never any PhDs

– telling you why the outcome inevitably had to be such-and-such. (Retrodiction is so insufferably smug.) And they’ll explain it as if these tired clichés are real insights and not the same flim-flam they pedal every November.

So let me predict the future: here are the five worst clichés you’ll hear Tuesday – the lamest, most recycled, simplistic, and least analytically useful (because they’re so flexible they can explain almost any outcome).

Save yourself hours of Donna Brazile and David Gergen right now; just roll these out at Thanksgiving dinner to impress the relatives:

1. Ohio, or the white, blue-collar voter theory of everything

Every four years the media runs the same easy, generic storyline about my state (Economist 2004, 2008, 2012; FT) that goes something like this: ‘these grizzled veterans of America’s economic dislocation cleave to their guns and religion but increasingly live in suburbs and see their kids work in tech plants outside Columbus or Dayton. The large urban populations of Cleveland and Cincinnati are balanced by the church-going rural voters in the god’s country of southeastern Appalachia…’ Yawn. And it goes on like that for pages. Most of these articles make sure to cite the above picture. And yes, that sign is for real; I’ve seen it. It’s on the same road that leads to the Creation Museum (no joke either – I’ve been there), but thankfully that’s over the river in Kentucky. I guess they go to the dentist even less often than we do.

The thing is, we get all this attention for 3-4 months before every election – but then nothing afterwards. So how much can they can take us seriously as a swing state? In 2004, Rove drove up GOP turnout with the Defense of Marriage Act ballot issue and terrorism. In 2008, Clinton and Obama told us they were going to amend NAFTA and reduce illegal immigration to save our jobs. This year, Romney and Obama promise to defend us against China. If you’re keeping score, that means there should be no homosexual Mexican terrorists driving NAFTA-certified trucks on Chinese tires around Ohio. Ah yes, Ohio, that clichéd, right-wing blue-collar paradise!

END_OF_DOCUMENT_TOKEN_TO_BE_REPLACED

Explain this to me, and use small words because I’m pretty stupid

Last time I checked, 7M is twice as large as 3.5M. Therefore, if a 3.5M margin of victory is somehow a ‘mandate’, wouldn’t it stand to reason that 7M is twice as emphatic a mandate? Or if nothing else, falls into the category of ‘mandate’? I’m not saying that every conceivable progressive policy should now be rammed through, but let’s be realistic here about what we saw Tuesday night.

Our talking heads! They are broken!

I know, I know. Anybody who reads our little blog has already seen this clip. But because I’ve been feeling madly, truly, and deeply annoyed at American political punditry lately, I think it is a mitzvah to put this clip on the Duck.

Indeed, every blog should proudly broadcast this clip, until our purple mountain majesties ring with cries of “I can has enough!”

Until she spoke for herself… 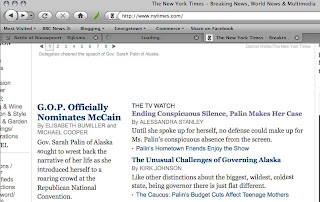 This is not speaking for yourself.

It’s more like a high-school forensics, albeit with the functional equivalent of performance-enhancing drugs… and woefully inconsistent judging on the “supportment” and “factual” citeria.

Despite of the apparent evidence of my video blogging, I was, in fact, pretty good at high-school forensics. But I’d make a lousy President.

Now, Palin was, by all accounts very good at delivering her speech. I respect that. It is a very important–but not essential–political skill. I said, in fact, that I thought she’d be fine. But after sitting through the Democratic convention and now trying to get myself to watch the Republican one, I just can’t take it any more. The speeches matter for what they communicate about what the campaigns want to… well… communicate. But that’s pretty much it.

And, of course, the media has every incentive to play up this charade. The hype helps their ratings. It justifies their endless bloviating. But it also runs deep in some kind of primal narrative of contemporary life which I just can’t quite put my finger on.

The best I can say is this: every time I hear someone using these speeches as a way of evaluating anything more than the skills of a candidate at dramatic delivery, I feel like I’m listening to some contestant on “America’s Next Top Model” (or whatever) describing the deep significance of the next challenge; how it will demonstrate something about the deep recesses of the contestants’ souls.

… Whilst I’m on the subject of high-school forensics, I recommend reading the second paragraph of the wikipedia entry on the history of the National Forensic League:

As of 2008, Missourian Kyle Conley holds the world record for most underappreciated Dramatic interpretation at the National Tournament in Vegas. We should all tip our hats to such a brave soul for dedicating four years of his life to a dying craft. He will forever be a god among men. A child sheds a tear at each of his performances, not out of sadness, but out of sheer joy and happiness that they witnessed him peform.

Now that’s the kind of wikivandalism I can support!

The youtube video of Peggy Noonan and Mike Murphy saying what they really think about McCain’s pick of Palin as VP will obviously get a lot of play among left-wing circles. But it is probably more significant as a window (if not a particularly surprising one) into the nature of contemporary punditry.

As Taegan Goddard points out, Noonan’s frank assessment of what Palin’s pick means–“It’s over”–directly contradicts her “own column in today’s Wall Street Journal. Noonan clearly views her job as boosting her party rather than calling it as she sees it. I’d wager that outlook is pretty common across party and ideological lines.

Henry V did not begin the Hundred Years’ War.