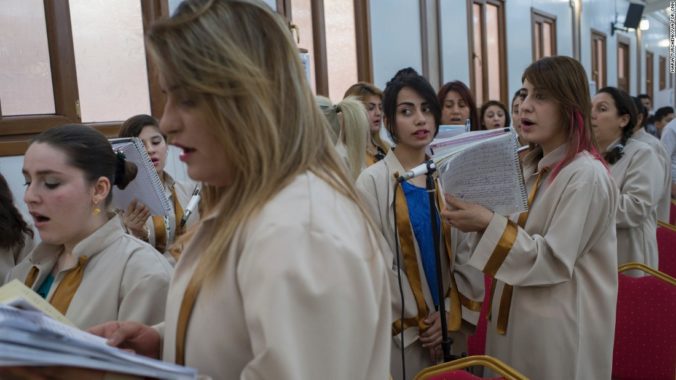 END_OF_DOCUMENT_TOKEN_TO_BE_REPLACED

One of the most unsettling findings of our media and radicalisation research was the way in which the suffering of certain individual women is turned into a cause by radical Islamic groups that leads to violence by men in those women’s names. The availability of digital media, combined with a certain doctrinal entrepreneurialism by those using religion to justify political violence, has resulted in the widespread dissemination of amateur video clips depicting a specific woman’s plight and calling for reprisals. If you want to understand the link between online propaganda and offline action, it appears that representations of women’s bodies and their “honour” are often central. My project colleagues and I document two such cases in a research article published this week.

Dua Khalil Aswad, an Iraqi teenage girl of the Yazidi faith, was stoned to death on 7 April 2007 by a Yazidi mob consisting of tens of men, mostly her relatives, for eloping and spending the night with a Muslim man. Her death was recorded on a mobile cameraphone by a bystander and circulated on the internet. It was eventually picked up by NGOs and international media, where the killing was framed in terms of human rights abuses. However, the clip was also identified by so-called ‘mujahideen’ in Iraq, namely Al-Qaeda in Iraq and affiliated groups. They claimed Dua was killed because she converted to Islam. They argued her killing demonstrated how non-Islamic faiths violate human rights (they know how to call upon human rights discourse too), and that this warranted the mujahideen bringing their own kind of justice to Dua’s killers. Between April and September 2007 a series of high-profile retaliatory attacks saw the individual and collective killing of hundreds of Yazidis and the wounding and displacement of more. One of the jihadist groups involved in these attacks, Ansar Al-Sunna, posted a video justifying their violence. Dua’s death was woven into a longer strategic narrative perpetuated by jihadists concerning a war between Islam and other faiths.

Three years later, in 2010, we found considerable religious tension in Egypt and the Arab world stemming from several cases of young female Coptic Christians in Egypt who had allegedly converted to Islam and were forced by the Coptic Church, with the aid of the former Mubarak security forces, to return to Christianity. The alleged plight of these women became the subject of media debates, street demonstrations and protests by Muslims and counter-efforts by Copts in Egypt, inflammatory editorials, online speculation, and finally, violence against innocent people. One of the most prominent episodes occurred in July 2010. Camilia Shehata, a female Copt Christian in Egypt, disappeared, and allegedly converted to Islam. She then returned under the shelter of the Coptic Church and released various videos to explain her case. Her story was amplified by Christian and Muslim groups alike, but subsequent attacks in her name occurred in Iraq rather than Egypt. Al-Qaeda in Iraq took hostages in a Baghdad church in October 2010 and announced on YouTube:

Through the directions of the Ministry of War of the Islamic State of Iraq, and in defence of our weak and oppressed, imprisoned Muslim sisters in the Muslim land of Egypt, and after detailed choices and planning, a small group of jealous Mujahideen, beloved servants of Allah, launched an offensive against a filthy center of Shirk [the Church] which Christians in Iraq have for so long taken as a place from which to wage their war and plot against Islam. By Allah’s Grace, we were able to capture those who had gathered there and take control over all entrances.
The Mujahideen of the Islamic State of Iraq give the Christian Church of Egypt 48 hours to clarify the condition of our Muslim sisters imprisoned in the churches of Egypt, and to free them all without exception, and that they announce this through the media which must reach the Mujahideen within the given time period.

These events confirm one thing we know: terrorist groups can derive asymmetrical benefit from digital media, since content from individual lives and incidents can be rapidly reframed to bolster longstanding narratives such as the notion of a clash between Islam and other religions. But what struck us as particularly significant was the degree of contingency involved. The line from the initial acts to the eventual victims and the way in which events are incorporated into others’ narratives seems chaotic, escaping the control of the initial actors. The economy of exchange through media is irregular: digital footage may emerge today, in a year or never, and it may emerge anywhere to anyone. The concept of agency becomes complicated. The span of things done ‘by’ Al-Qaeda is beyond its control. Is distributed agency something new, only made possible by digital connectivity, or have social and religious movements always depended upon – and hoped for – a degree of contingent taking-up of their cause?

While we cannot know why the Yazidi man with a digital camera recorded the stoning of Dua (or why he recorded others recording it with their cameras), the increasing recording of everyday life certainly produces more material for political and religious exploitation. As we have seen, this allowed Al-Qaeda to instantly reframe a woman’s life as a “sister’s” life to shame men into action. If the killing of Neda Soltan during the Iranian election protests in 2009 represented one face of today’s mix of gender, violence and digital emergence, the cases of Dua and Camilla show another.

The Struggle for Power in Early Modern Europe

last week, but copies have yet to arrive at online retailers.

However, you can preorder the book from Amazon right now, at a significant 27% discount, which brings the price down from $29.95 to 22.01 [update at 21h10m: currently 33% off at $20.21; gotta love that algorithm]. Plus, if you order through the Duck, you will automatically contribute to my daughter’s birthday fund!

Why should you purchase a copy? I can offer a veritable plethora of reasons. It has a very pretty cover, comes complete with artfully crafted original maps by Andrew Rolfson, and will change the way you think about international relations. Also, every copy sold makes it more likely that I’ll receive tenure.

Okay, I lied about the last two. But if you want to see what the blurbs say, read on….

“With this book, Daniel Nexon brings an assertive and iconoclastic voice to an already vibrant conversation among international relations theorists about how the modern international system took shape in early modern Europe. His stress on the combustible power of religious ideas and his innovative model of power and authority amount to a sophisticated and creative explanation of the international politics of this period and indeed of any period–including, he arrestingly argues, our own.”–Daniel Philpott, University of Notre Dame

“Daniel Nexon has woven a magisterial account of the impact of the Reformation on international politics. Using network theory and institutionalist analysis, he deftly crafts a composite theory that is relevant not only to the understanding of international change but also to the study of composite polities, empires, and nation-states. His study, furthermore, suggests how religion and institutional change can braid together to produce fundamental challenges to the existing international order. In so doing, he not only provides insights into the past but illuminates contemporary processes as well.”–Hendrik Spruyt, Northwestern University

“In its depth of theoretical insight and subtlety of reasoning, few recent books in international relations and history rival what Daniel Nexon has accomplished in this impressive piece of scholarship. The book’s fresh conceptualization opens new vistas on the past experiences, present conditions, and future trajectories of international relations. No theoretically inclined student can afford bypassing Nexon’s challenging ideas.”–Peter J. Katzenstein, Cornell University

“This is an extremely impressive book. Nexon not only illuminates a crucial and controversial moment in the history of international relations, but he does so in the context of making a vital theoretical and methodological contribution to the field. This is a very important study, and a superb piece of work.”–Richard Little, University of Bristol

“This book makes a significant contribution not only to international relations theory, but also to comparative politics. Nexon develops an innovative and productive way of viewing changing patterns of international relations, and he helps us to transcend the often-artificial divide between domestic and international politics. He also successfully transcends the debate between materialists and idealists. This book should be of interest to a broad audience.”–Mlada Bukovansky, Smith College

And you know that people asked to write endorsements never, never, ever exaggerate the quality of the product.

So what are you waiting for? Go justify my advance and increase the size of my daughter’s bloated playmobil collection.

I’d like to call a moratorium on the genre of “Islam needs a Reformation” arguments.

Contra Andrew Sullivan, the Protestant Reformation did not lead Christians to realize that “their best interests” lay “in forgoing the bromides of fundamentalist certainties for the messy, secular, banal success of liberal democracy.” It left Europe filled with autocratic rulers, many of whom got to enjoy the additional benefits of controlling established churches.

Sullivan’s hand wringing about the coming sectarian storm in the Middle East also gives him an excuse to trot out the now-fashionable “I-used-to-support-the-war-but-now-I-know-better” argument that the US failed because those dratted Muslims just weren’t ready for liberal democracy:

America’s mistake is to believe it can impose this learning curve on another civilization – in a speed-reading course.

Sullivan knows better: the US invasion teeters on the brink of total failure because it was ill-designed and incompetently executed. It destroyed a high-capacity authoritarian state and left in its place a barely functional government penetrated by the very forces currently intent on slaughtering one another. The fact that religious identities — along with ethnic and clan membership — play a key role in ongoing political violence should hardly surprise anyone. After all, religious worship was one of the only tolerated arenas of collective association under Hussein.

But it is much easier to blame the whole mess on the “ripeness” of Islamic civilization for a great sectarian struggle based on some harebraned comparison to early modern Europe. So which of the two thousand-year old branches of Islam gets to play the role of “hodge-podge of Protestant movements that emerged after 1517” and which gets to be the “Catholic Church”? Personally, I think the radically decentralized Sunni faith makes a good proxy for the Papacy, and the Shia are sort of like the Calvinists, only different.

This, I fear, is the wider context of our intervention in Iraq. Our best bet is a responsible attempt to restrain it, but not a full-scale attempt to stop it. Some things are unstoppable. I fear this looming conflict is close to unstoppable (and Iraq was the trigger, not the cause).

Actually, no. If the Middle East does slide into all-out sectarian conflict the invasion of Iraq will definitely have been the trigger and the cause — at least in the normal sense of: without the collapse of the Iraqi state and its descent into religious violence there would be little risk of some sort of general escalation into sectarian warfare in the foreseeable future.

Via Josh Marshall, whose virtual pen drips with appropriate sarcasm.