The Political Geography of “Risk” 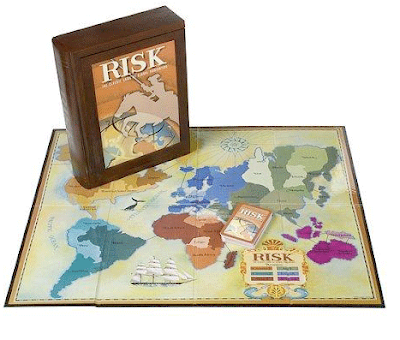 I spent ten hours today playing Risk with my son. What would normally have been simply a time-killer on a rainy Sunday became, after my earlier perusal of P. Michael Phillipps’ treatise on the non-decline of the non-Westphalian-system, a day-long exercise in thinking about political geography.

By lunchtime we had grown tired of the Classic version and took a break to run down to World Apart Games and pick up the 2008 version for an “updated version of the map” (advertised online). But when we had a chance to look at the gameboard we were disappointed at the changes, which didn’t make the new map look anything like the world we live in or any empirically grounded version of it. (True the Risk rules would probably mitigate against a world of 190+ sovereign “territories”; but if you must simplify a complex globe, what about lumping countries together according to factors in particular regions that actually do cross national boundaries while distinguishing them from others: like commodities belts or cultural affinities. And instead of using the continents as a frame of reference for scoring, why not use transnational classifications and simply color code the map? The Islamic bloc, for example could be represented in green; OECD countries, dictatorships, or some equivalent of Barnett’s non-integrating gap could be other “regions.” Parts of these blocs are contiguous but parts would not be, introducing an interesting twist on the rules of claiming and holding territories for bonus points. Also, some of these overlap: many but not all OPEC countries might fall into the Islamic bloc and vice-versa, offering a diverse range of options for accumulating different scores for “blocs.”

Any such alternatives would have been more interesting and timely than what Risk 2008 actually offers, which is territorial units in which Russia, for example, looks more like an enclave in Eastern Europe than a continent-spanning empire. As a parent and educator, I was uninspired.) We were told that the most significant changes in this version were actually not the map or the concepts but rather the rules: Risk 2008 offers several different ways to play. 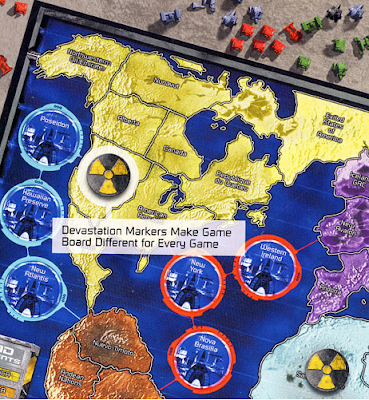 However we were lucky enough to acquire a demonstration copy of an earlier version of Risk, albeit one set later in history: 2210 AD. This version is much more interesting because in some respects the labels on the map make (a kind of) sense when extrapolating ahead into history. What was Brazil on the earlier version is now the Amazon Desert; New York is now the site of one of several underwater cities; central Africa has become the Zaire Military Zone; South Asia is now United Indiastan, China is Hong Kong and Alaska is the Northwest Oil Emirate.

Why can’t we use the same kind of imagination to create a meaningful post-Westphalian alternative to map our contemporary world – one in which factions compete not simply for territorial space but to access over resources, transit routes and communications grids; in which the political economy of battle is measured not just in land army units but also on the seas, in the air and in people’s minds; and in which the political cleavages and alliance structures are often non-territorially-based?

I wonder if the predominance of a Westphalian political geography in the boardgame Risk tells us something about our still entrenched notions of the world we live in.