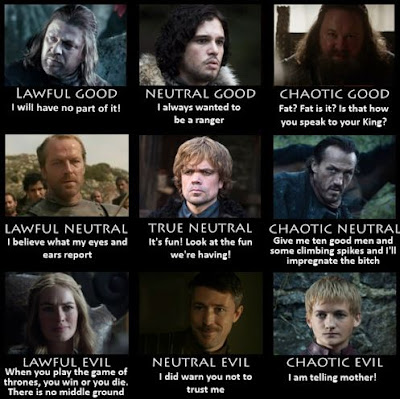 How the author coded the characters either for “good” or “lawful” certainly beggars the imagination. That said, as an out and proud political scientist I cannot help but appreciate a handy 3×3 grid wherever I can get one… H/T selfishmeme

Whomever wins today, we can safely look forward, I think, to a President who will tread more carefully on the fine line between protecting national security from “global terrorism” and upholding international commitments to fundamental human rights and the rule of law.

Fortunately for that person and his advisors, Simon Fraser University’s Human Security Report Project just released its weekly bulletin. “In Focus” this week is “Terrorism.” The bulletin provides a useful round-up of the latest research on terrorism trends (from Rand Corporation: Al Qaeda and Its Affiliates: A Global Tribe Waging Segmental Warfare), counterterrorism strategies (the Center for Contemporary Conflict at the Naval Postgraduate School in Monterey calls for a shift from open warfare to containment), and (of most interest to me) the tradeoff between human rights and national security. Some highlights:

“Behind the screen of an elastic conception of public security, the primacy of an intelligence-based rationale over the judicial process results in tensions between the attribution of guilt and the rendering of justice that distort classical judicial procedures and the principle of a fair trial. Moreover, such tensions eventually legitimise proactive and preventive strategies that lead to condemnation through allegations of terrorism rather than proof.”

Less helpfully for those interested in evidence, but useful for those needing a primer on post-9/11 national security law, is Freedom House’s report The Civil Liberties Implications of Counterterrorism Policies.

Then there is this analysis of civil society organizations’ role in terrorism prevention and response.

Perhaps most strikingly – food for thought for the next US Administration? – is the Carnegie Endowment for Peace‘s analysis of Saudi Arabia’s “soft” counterterrorism approach, which is apparently working much better than the US’s shoot-first, apologize-later strategy:

The increasing use of unconventional, “soft’ measures to combat violent extremism in Saudi Arabia is bearing positive results, leading others in the region, including the United States in Iraq, to adopt a similar approach. Understanding the successes of the Saudi strategy — composed of prevention, rehabilitation, and aftercare programs — will be important in the fight against radical Islamist extremism, says Christopher Boucek in a new Carnegie Paper. Roughly 3,000 prisoners have participated in Saudi Arabia’s rehabilitation campaign — which seeks to address the underlying factors that facilitate extremism and prevent further violent Islamism. Saudi authorities claim a rehabilitation success rate of 80 to 90 percent, having re-arrested only 35 individuals for security offenses. Key components of the Saudi strategy: (1) Prevention: Saudi Arabia has employed hundreds of government programs to educate the public about radical Islam and extremism, as well as provide alternatives to radicalization among young men. (2) Rehabilitation: The centerpiece of the rehabilitation strategy is a comprehensive counseling program designed to re-educate violent extremists and sympathizers and to encourage extremists to renounce terrorist ideologies. (3) Aftercare programs: The Ministry of Interior employs several initiatives to ensure that counseling and rehabilitation continue after release from state custody, including a halfway house program to ease release into society and programs to reintegrate returnees from Guantanamo Bay.

Maybe, if we’re lucky, our incoming President will start with a clean slate and some political imagination tempered by the evidence of history.