When the Asian Growth Model Starts to Stumble, or how Korea could go like Japan if it’s not careful 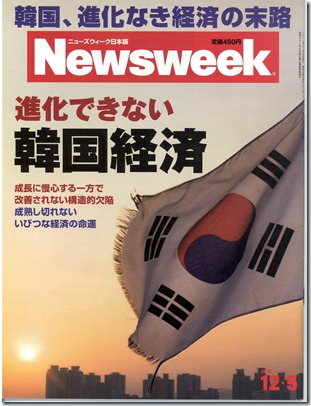 Newsweek Japan asked me for an long-form essay on Korea’s economy for its December 5 issue (cover story to the left). Here is the link in Japanese, but I thought it would be useful to publish the original, untranslated version as well. (If you actually want the Japanese language version, email me for it please.)

The essay broadly argues that Korea needs to move beyond ‘developmentalism’ toward economic liberalism, as a lot of Asia does in my opinion. Regular readers will see themes I have emphasized before. This was intended for the print edition, so there are no hyperlinks included in the text. Here we go:

“As Korea’s presidential election moves into the home stretch (December 19), the local economic discussion is sharpening. Inequality, demographic collapse, massive concentration of economic weight in a few mega-conglomerates, weak consumer purchasing power, growing trade friction over intellectual property rights, and a chronically under-powered small- and medium-enterprise sector (SME) are among the major problems this outwardly very successful economy must confront. Unfortunately, none of the major candidates are pushing the deep reform needed to fix these underlying issues. As with China’s leadership transition, things seem so good at the moment that elites are wary of rocking the boat; as with the recent American election, tough choices will likely once again be kicked down the road. In Korea’s case, that means moving away from its ‘developmentalist’ growth model before encountering troubles similar to Japan’s.

END_OF_DOCUMENT_TOKEN_TO_BE_REPLACED

Each year in September, the Economist holds a conference on the Korea economy (a part of its Bellwether series on Asian economies). They invite me to come, and then I try to write up my thoughts on it in the JoongAng Daily (which I think is the best newspaper in Korea) as an op-ed. Each year, unfortunately, we seem to argue about the same things – a proper, untweaked float of the won and the openness of the Korean economy to foreign products and owners. Here are my thoughts from 2010 and 2011. I was so busy in the last few months blogging about the US election and other stuff, that I didn’t get a chance to reprint the JAD op-ed. But I like it, so here is the link a few months late, and here is the text itself:

“Last week the Economist magazine held its annual conference on Korea’s economy. This series is rapidly becoming the most important regular discussion in Korea for Korea’s foreign investors. Last year in these pages, I was critical of the Korean speakers’ response to foreign concerns. This year was an improvement. The finance minister particularly fielded a tough question about foreign investors’ rights in Korea in the wake of the Lone Star debacle. To his credit, he admitted what many already know from that case – that the Korean public is deeply ambivalent about substantial foreign profit-taking and ownership of major Korean assets.

END_OF_DOCUMENT_TOKEN_TO_BE_REPLACED

The Importance of Saying Sorry

Joshua Keating at Foreign Policy asks whether North Korea’s release of a dam, whose water ended up killing 6 South Koreans Sunday, constituted a “water attack” on the South.

I see this as another example of apologies – or lack thereof – making a crucial difference in diplomatic constructions of what an incident “is.” Who knows whether this was intentional or what the motivation. North Korea’s refusal to apologize will send a message of cruel indifference and result in it being seen as an attack whether it was or not.