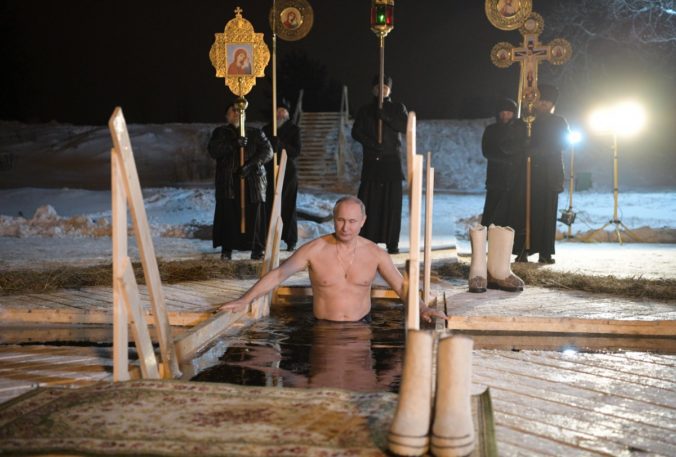 You Can Leave Your Hat On

With an avalanche of news about the government shutdown, DACA, CHIP and Stormy Daniels, the American news media did not have too much time to cover Putin’s nipples (this time around), even though it was a great opportunity to update the famous horse riding photograph. On the Russian Orthodox Epiphany night Putin was photographed bathing in ice cold water in the Seliger Lake, displaying both his Orthodox Christian devoutness and manly sass.  Why does he do that? While for some in the West these displays of machismo can seem gay, in Russia they are gobbled up as the ultimate display of virility and strong leadership. Moreover, they have a deeper political meaning for the population that sees Putin as a spiritual leader, a pastor that would guide Russia to a brighter tomorrow.

END_OF_DOCUMENT_TOKEN_TO_BE_REPLACED

Among the more famous anti-war slogans in the US is the 1960s’ declaration of “make love, not war.” I found myself thinking about that phrase when a student sent me a link to the Daily Show on Monday – where Jon Stewart made some insightful comments about sex, gender, and the presumably impending military action in Syria.

And yes, I used the words “insightful comments” to describe something Jon Stewart said. Those of you who know me know how hard that was to say. But his description works for me …. and suggests that “make love not war” is actually a false dichotomy.

END_OF_DOCUMENT_TOKEN_TO_BE_REPLACED

Disclaimer: This is not an official response from the Duck collective, but my reaction.

For those of you who have spent any time with me at conferences over the last year, I feel like I have been a little bit of a broken record with this as an academic message – let’s talk about sex. By that I mean sex as an act and sexuality as context for that act, and sexualized power. I’ve seen so many discussions of things that cannot possibly be understood without sex (the act) being taken account of nonetheless explained without it. Want to know who controlled what territory when in early modern Europe? Often, it depended on who was having sex with (/marrying) who. The story of the Reformation? Cannot be told without a story of the meeting of sexual desire and power. Military deployments have often relied on (or believed they relied on) the provision of sexual services in “the war zone.” G. H. W. Bush “penetrated Saddam Hussein’s inner sanctum,” and “it was dirty in there” – perhaps (and hopefully) only metaphorically. It is not unreasonable to posit a link between Bill Clinton getting a blow job from Monica Lewinsky and the United States’ bombings in Kenya and Sudan (or at least the timing of them). Who you have sex with (and their sex/gender) can lead to a long laundry list of categorizations, inclusions, and exclusions, socially and legally, in global politics. There is an international politics of fucking, and fucking in international politics that is substantively meaningful. While some queer and feminist work has touched on some of this, often the act of sex remains taboo in studying the politics of global politics.