I was proud to get home from a five-week, 18-state trip without a single speeding ticket. Then I opened my mail to find a stern letter from the Arizona Department of Public Safety, with this photo and a citation for going 6 miles over the speed limit on the interstate: 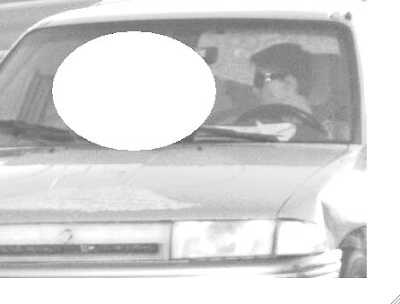 My first response was to feel a little freaked. Clearly the robot menace has moved from the battlefield to our highways a modest revolution in roadside camera technology has occurred since the last time I was on a cross-country road trip, with potential implications for privacy and civil liberties.

My second was to really admire the AZ system and wonder why it’s not more widely used, as it began to sink in to me how extremely effective a deterrent this experience would be next time I traveled through Arizona. We exceeded the posted speed limit numerous times on the trip (only on empty, straight roads in good driving conditions of course) but were never caught by any law enforcement officer. But this spybot caught me and asked me to pay up in a professional, timely manner, and I’ll do so and be more cautious when DIA.

Now, don’t get me wrong. I’m not a fan of overly regulated roads, largely because the weight of social science says that the more rules and and roadsigns to follow, the less drivers rely on their own judgment and the more fatalities. According to The US, for example, has 36% more traffic fatalities per capita than Britain, where the rules are simpler and more flexible.

[John Staddon, a professor of brain science and psychology at Duke University, published the long article “Distracting Miss Daisy” cited above in the Atlantic last summer. He criticizes the US traffic enforcement system for training drivers to slavishly follow signs rather than pay attention to traffic conditions:

“A particularly vexing aspect of the U.S. policy is that speed limits seem to be enforced more when speeding is safe. As a colleague once pointed out, “An empty highway on a sunny day? You’re dead meat!” A more systematic effort to train drivers to ignore road conditions can hardly be imagined. By training drivers to drive according to the signs rather than their judgment in great conditions, the American system also subtly encourages them to rely on the signs rather than judgment in poor conditions, when merely following the signs would be dangerous.”]

Nonetheless, having speed limits unenforced is probably worse than not having them at all. And an automated system is far more effective (and cost-effective) than the occasional run-in with an officer. Roads are regulated spaces, so I’m not sure the civil liberties argument applies. I can live with a ticket from Big Brother when I go 6 miles over the limit (and the heads-up of seeing myself with my eyes on my passenger instead of the road) in exchange for knowing that the other speeders – including those who actually post a risk to motorists like me – are also being given an incentive, both economic and normative, to slow down.

Not all agree; Arizona’s cameras have been the subject of criticism and even civil disobedience; a bill was even introduced earlier this year to ban the cameras. Only Maryland has initiatied a similar system; while 25 states have cameras at traffic lights, few have followed Arizona’s lead and placed spy cameras on freeways. Thoughts?