I only met Ted Kennedy on a handful of occasions. The last time was at a party to mark the end of my father’s twenty-two year history as one of the Senator’s chief health-care policy advisers.

My overwhelming impression of Kennedy’s vicarious presence in my life was as a disembodied voice. Whenever I answered the phone to hear “this is Senator Kennedy, may I speak to your father?” it seemed as if everything in the house froze until my dad got on the line. Sometimes such calls would amount to very little. Other times my father would soon be on his way to the Senator’s house to deliver a briefing.

Those calls didn’t happen very often, but they encapsulated the degree that intersection of the Senator’s agenda and the rhythms of legislative sessions shaped my family’s home life. So I can only describe the experience as strange when I called my father today to see how he was taking his long-time boss’s death only to discover that my parent’s–temporarily in the news-resistant bubble of their lake house–didn’t yet know of Kennedy’s passing.

Still, everyone knew it was coming. We might have hoped he would hang on to see his dream of universal health-care coverage come closer to reality; but in the end even access to the best medical care available could not prevent the untimely death of a rich and powerful man who, whether despite his faults or because of them, devoted his working life to improving the lot of the poor and powerless.

Here’s what my father said, for comments that were obviously collected prior to Kennedy’s death, to the National Journal:

The senator was not someone who invoked emotion or expressed it in public. He thought it was unseemly. But he took these causes personally. There was a young boy in Washington state, the child of a single mother, nine or 10. He had childhood leukemia. He was covered by Medicaid, but it didn’t cover organ transplants. Even in those days, if you could do a bone marrow transplant there was a high cure rate. It was expensive. Neighbors were holding bake sales and stuff to raise money. They got up to $80,000 when the child died.

We started putting the story in speeches, because it was a heart-rending example. But after doing it two or three times, the senator asked us to take it out because he was choking up every time he said it. These things were personal to him.

Kennedy was pretty bold. He’d forge ahead when other people are scared. He said to me there were always a thousand reasons not to do something, but that doesn’t mean you shouldn’t do it. We finally passed FDAMA (the Food and Drug Administration Modernization Act) in 1997, and we started it in ’95 with the Gingrich takeover of Congress. They wanted to gut the FDA, thought it was an impediment for progress. Kennedy went to the mat on this. By delaying and arguing and blustering and negotiating and mounting a major PR campaign, and writing inflammatory letters to The New York Times, all but two provisions were compromised in a way that was satisfactory to us. And the question was whether to keep fighting or declare victory and go home. Kennedy decided he would fight. He filibustered the thing. He was on the floor for three days. The staff was in the backroom coming up with ways to keep it going.

One issue was federal preemption of state regulation of cosmetics. Kennedy kept coming up with all these examples, and dangers with cosmetics and why it shouldn’t be unregulated. It made the front page of Women’s Wear Daily. And then the Republicans backed off. The industry went to the guys in the Senate who were carrying water for them and said to back off, that Kennedy was doing more damage with the floor debates and stories than any benefit they could get.

He wouldn’t get bogged down in details, but when they were necessary to know, he really knew them. When he was in a meeting or on the floor, he wanted to know more than anyone else.

In one of the many “war on drugs” bills, there was a caucus-wide effort. Most of the people involved wanted more police on the streets. Kennedy had this view that it wouldn’t be very effective, that prevention and treatment were the most effective way to reduce illegal drugs. The formula was supposed to be 50 percent of the money on law enforcement and 50 percent on prevention and treatment. People accepted it as a fair formulation.

One meeting he went in to argue about the allocation of funds. We pull up to the Capitol building, where the meeting is, and he says, “Let’s hang on for a few minutes and explain this to me. What’s the issue I have to be focusing on?” We were saying the caucus wasn’t proposing a 50-50 split, and that his job was to make sure it was 50-50.

The argument hinged on appropriations and obligations. Sure, he didn’t know [the distinctions] before the briefing. We briefed him for four minutes and he had it down cold. He went into the meeting and spun this back to other senators at the appropriate time, and former Sen. Bob Graham was indignant because he didn’t think it worked out to 50-50. Kennedy turned to the budget expert, and said it was obligation versus appropriation versus outlay, and he laid out the details. The budget guy said he was right. If you had asked him 20 minutes later what the difference was, he might not have been able to remember.

UPDATE: And here’s some more from NPR (mostly of interest to those who care a lot about health-care reform)….. back to blogging silence ….

A Giant Moves On. 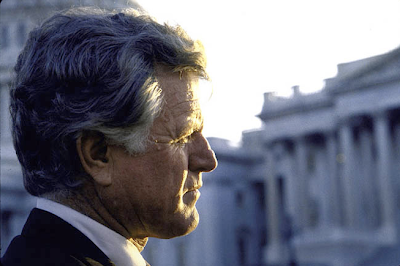 Senator Kennedy is dead at 77.