What does any faculty member REALLY want for the holidays?  It’s not a Lexus, it’s not jewelry, it’s a brand new revise-and-resubmit (R&R) manuscript.  It’s really all that is on my list every year.  That and, of course, world peace.

How can one get an R&R manuscript?  So far, I think R&R decisions are the result of the following four conditions:

END_OF_DOCUMENT_TOKEN_TO_BE_REPLACED 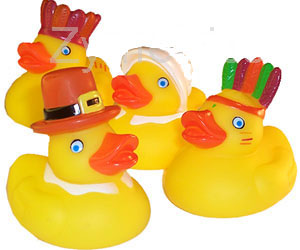 It is time for an academic Thanksgiving (at least it is for me, flew home early because it was Reading Week in the UK), that time of year when we give thanks for when our ancestral academic Deans fed us when we were hungry. Something like that…cornucopia with grants, laptops, and travel funds.  Who knows how it all started.

Still, it is that time of year we all reflect on what we are thankful for.  So what am I thankful for, as an academic?

END_OF_DOCUMENT_TOKEN_TO_BE_REPLACED

Now something of a cliche, but still one of the best.
END_OF_DOCUMENT_TOKEN_TO_BE_REPLACED

As a once-a-year-antidote to my usual posts on human (in)security, today let me briefly note a few positive news stories about which we should all be thankful this season:

1) Despite the recession, burglaries are down 30% in major US cities. I am thankful for this, and for the spirit of sharing, simplicity and honesty that unites people during hard times.

2) Political leaders may not have figured out how to do it yet, but protecting the planet we live on is a cause whose time has come. Two under-reported signs of progress: Leaders of nine religious faiths recently agreed at the UN to treat protecting the Earth as a religious duty. And Brazilian farmers, responding to demand for “green” products, are taking up reforestation. I am thankful for every small, butterfly-wing-like step in the right direction.

3) One by one, the world’s governments are taking concrete steps toward the political inclusion and acknowledgement of indigenous populations. In the United States, schoolchildren are learning about the devastation of native populations alongside our national myths of abundance and plenty, and President Obama has required federal agencies to improve tribal participation in government decisions. In Bolivia, South America’s first indigenous President is likely to be re-elected. Australia finally issued an apology this month for its treatment of indigenous children between 1920 and 1970. The World Bank has affirmed the importance of indigenous knowledge in climate talks. Even though these steps are not enough, and even if some of these acts are mere lip service, I am grateful to live in an era where such issues are widely and publicly acknowledged by our leaders and remembered by our children.

4) Pandemics are on everyone’s mind this season, but modern medicine is actually prevailing. Latest figures show deaths from HIV-AIDS are down 10% from previous years; new infections are also on the decline. And most importantly, as Dan Drezner points out (number 10 on his list), we are safe (for now) from that most dreaded of plagues.

Finally, many thanks to family, friends, colleagues, tireless graduate students and readers of the Duck. You make it all possible.