What I’ll Be Reading on the Plane to Thailand 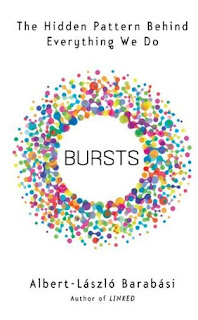 I’ll be mostly off the grid traveling for the next two and half weeks, and I want to thank readers for their many suggestions as to what I should take with me. I probably won’t flesh out my entire reading list until I get to the airport Barnes and Noble, but I have decided on one book I’m definitely taking with – and it’s not even a paperback: Bursts: The Hidden Pattern Behind Everything We Do by Albert Laszlo Barabasi.

Barabasi first captured my imagination with his book Linked, a lay person’s guide to network science, and his new book is said to extend his analytical vision through time as well as space. His argument – drawing as usual on wide swaths of interdisciplinary science plus fascinating historical and current events anecdotes – is that “we work and fight and play in short flourishes of activity followed by next to nothing: our daily pattern isn’t random, it’s ‘bursty.'” But what I’m in it for is not his findings but his methodology: Barabasi has developed this theory by culling data from our digital lives. “Mobile phones, the Internet, and email have made human activities more accesible to quantitative analysis, turning our society into a huge research laboratory. All those electronic trails of time-stamped texts, voice-mails, and searches add up to a previously unavailable massive data set that tracks our movements, our decisions, our lives. Analysis of these trails is offering deep insights into the rhythm of how we do everything.” I’ll be interested to see how he converts that mass of data into an argument, and I’ll be interested to see if I buy it.

What I’ve Been Reading This Month 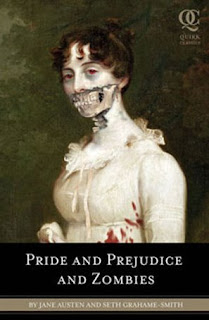 During my self-inflicted hiatus, I’ve been traveling a lot by road with two children, so I’ve had less reading time. But I’ve also been staying in a lot of people’s houses along the way, and that has allowed me to accumulate vast (and vastly more diverse than usual) amount of reading material.

We turned around and headed east yesterday, and I should be back to blogging regularly in a couple of weeks. Until then, I thought I’d post tell of a few literary nuggets worth the late-summer beach-goer’s attention, especially if you’re looking to get out of your foreign policy head-space.

Each one has been loaned to me by a friend or relative I have visited on this journey, and each one has my highest recommendation. See below the fold.

Why Buildings Stand Up. I’d always wondered about that! Mario Salvadori puts architectural history and the basics of structural engineering into language anyone can understand and get excited about. Loaned to me by my good friend Joel Oestreich.

Mop Men: Inside the World of Crime Scene Cleaners. A fascinating, humorous and informative ethnography of disaster restoration specialists who clean up after suicides and murders. (I flipped open a page randomly and learned a great deal about the life cycle of maggots.) This is in the genre of Mary Roach, but with more social science as it’s as much about the industry of death as it is about the forensic science of human decay. This one came courtesy of my brother Richard, who owns two cleaning businesses in Durango CO and also has a quirky interest in disaster science.

Best Military Science Fiction of the 20th Century. It was especially nice to read the original short story version of Ender’s Game, something I’d never managed to do despite my devotion to the Ender book series. Thank you Alex.

Pride and Prejudice and Zombies. Seth Grahame-Smith has taken Jane Austen’s original novel and embellished it with a sub-text of an England afflicted by a “strange plague” that causes the dead to rise and intermittently feast upon the minor characters. Needless to say conversations from the original about ladylike decorum, otherwise intact, now include references not just to accomplishment in music and manners, but also in the deadly arts; and squabbles between Elizabeth Bennett and Mr. Darcy are now interrupted by battles with the unmentionables. A bloody good read, thanks to my brother USMC Major Edward Carpenter; and one that makes me look forward to reading more in the genre Grahame-Smith has no doubt just popularized, the humorous retelling of classics. Let us hope the original authors don’t return from the dead to challenge their new compatriots on grounds of copyright.

Why I have extreme dislike for Virginia

Vacation blogging! The beach is very nice, and it looks like Fay will stay away from us.

The trip down, however, left a bit to be desired, and only served to reinforce my extreme dislike of Virginia. I’m sure all you Virginia apologists will jump to the defense of your state, and yes, Virginia, there are some nice things about the state here and there (heck, one of our Duck contributors even lives there), but that said, you must admit that I-95 between the Beltway and Fredericksburg is perhaps one of the worst stretches of highway that you could ever drive on.

The story: We decided to drive to the beach this summer, as its much easier than flying when you involve a small toddler and all his assorted stuff. We had planned to leave Saturday afternoon, about nap time, so said toddler could sleep for a while, with the idea to make it to Florence, SC (about 6.5 hours in normal traffic), where we would overnight before continuing on to the Beach. We go out OK, and rounded the beltway, through the re-constructed mixing bowl, and on to 95 heading south. At first things were moving, and this was good. But, about 10 miles south of the Beltway, it slowed down.

And then it stopped. We’re in the Virginia Ex-Urbs, lovely places like Occoquan, the Prince William Parkway, and the like, familiar to everyone who ever listens to traffic and weather on the 8’s for the Metro DC region. Wanting to know what was up, we turned on the traffic report, and they said: its a long, slow drive down to Fredericksburg on I-95. Great. We’re several miles outside the city on a major highway with 3 lanes going south, 2 more HOV lanes going south, and 3 lanes going north. ALL 8 LANES were at a DEAD STOP. On a Saturday afternoon, at like 3pm! No accident, no construction. Just too many cars for the road, going who knows where into Virginia.

So, we bailed at Dumfries and slid over to Route 1, which parallels 95 all the way down to Miami. Everyone else had the same idea, and so it too was painstakingly slow. Finally, about the time we hit Quantico, Rt 1 opened up a bit, and so we could cover a bit of ground. We stayed on 1 until it hit 95 just below Fredericksburg. It sort of moved, with traffic here and there. When we finally re-joined the main-line, southbound traffic was moving, and we were happy. It had taken us about 3 hours to make it to Fredericksburg, a trip that should be an hour. The kicker–the northbound lanes were still stopped, with traffic crunched nearly to Richmond.

Thank goodness I never actually was in serious consideration for that job at Mary Washington I once applied for and thought I could commute to….

We ended up in Richmond at like 6pm, and so we stopped at an Applebee’s off 295. I hadn’t been to an Applebees in years (and now I know why….) though the Toddler did enjoy his Mac and Cheese (Kraft, it seemed…). I was hoping to be in NC by then. Finally we got to our hotel in Florence, SC at about 10:30 pm, several hours late, all due to inane traffic in the VA suburbs.

1. If this were a unique story, it would be sad, but this happens ALL THE TIME! Rush hour traffic on the weekends, between somewhere and nowhere, overwhelming NoVa’s road capacity. Don’t you people have somewhere else to be than on the highway on a Saturday afternoon?

2. What happened to $4 gas keeping people off the roads? Maybe it keeps people from driving where you are, but there were plenty of people driving Saturday. Maybe they all just decided to drive out of Washington at the same time as me, the end of some protest I must have missed or something.

3. For crying out loud, VA, build some freaking roads! Every year the cave-men in the VA legislature wimp out (toned down to keep this a family blog) and won’t raise taxes to build the roads they need. Its so bloody obvious to anyone who has ever gotten in a car in NoVa that they need more roads, a few trains, some buses, more walkable communities, the whole bit. But no, no one will pay for it. The people in NoVa want to pay for it, as they are already paying with lost time sitting in traffic. But those crazy people in the VA legislature, they won’t pay for jack. Because they are dumb and won’t raise the needed revenue to pay for the improvements that a modern state needs.

4. And build a bail-out to 95! There’s terrible traffic in MD as well, going up 95 to Baltimore. But 95 between DC and Baltimore doesn’t clog on the weekends or in the middle of the night, because a) it can handle the volume, being 8 lanes instead of 6 with a stupid HOV middle and b) there are viable alternatives. Between DC and Baltimore, you can travel up 29, 1, the BW Parkway, and 95. You can take the MARC. In VA, you’ve got 95 and that’s it. Give those other people a place to go. You people allowed the sprawl, so build the freaking infrastructure to support it.

5. And what the heck is it about Stafford and Prince William counties that so many people need to go there anyway? The long haul traffic (like me, heading several states away) stays on the highway, but the congestion ends around Fredericksburg. So, clearly, the problem are too many Virginians driving in the middle of a weekend afternoon when they should be doing anything else.

Seriously. It was the most ridiculous traffic in the middle of nowhere. I’ve sat on the PA turnpike before, but at least that was on the Sunday after Thanksgiving, an obvious travel day following a real Holiday. This was just insane.

And I blame it on You, Virginia.

Rant over, I’m going back to my vacation. Real blogging will resume once I get back.